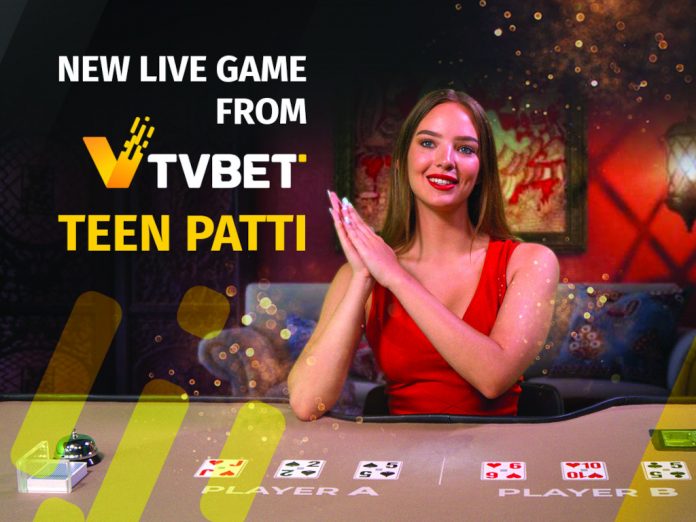 Operators may well be familiar with the Teen Patti games presented by many live dealer providers and online casinos. Promising to shake up the status quo, TVBet presents their innovation on the genre: a new betting version of Teen Patti adapted specifically to a live streaming format.

TEEN PATTI: ABOUT THE GAME

Teen Patti or simply “Three Cards.” The homeland of Teen Patti, or simply “Three Cards,” is India. It is usually compared with Poker. During the 20th century, Teen Patti was one of the main family card games in the country, especially during the five-day festival of lights — Diwali. Subsequently, “Three Cards” were spread in private gaming clubs in Goa and Mumbai and with migrants from India – throughout Southeast Asia. In 2010, even a movie about this game was filmed in Bollywood, which attracted interest to Teen Patti worldwide and led to its appearance on the Internet.

Initially, TVBet was inspired by this Indian game and developed its live betting version specially for its Asian partner Supernowa. But then, seeing players’ involvement and growth in bets, TVBet has decided to add the game to its portfolio and make it available to all of its partners.

The game rules are simple, which can captivate not only the local audience but all the players all over the globe. The game is broadcasted live 24 hours a day.

One standard 52-card deck is used. After shuffling, a presenter opens one card for each of the players until each has three cards. From these cards, combinations are made. So, punters have to decide which virtual players will collect the strongest combination and win. Players may bet on a winner of the game and a winning combination as well.

Teen Patti combinations are similar to those in a usual Poker. There are six winning combinations at TVBet Teen Patti: Three of a kind; Straight flush; Straight; Flush; Pair; High card – the card with the highest value.

If neither player has at least a two-card hand combination, the winner is determined by the high card.

Before each game, bets may be placed both on the current game and on the next draws. At the same time, bets of different draws can be combined both within Teen Patti and within other TVBET games. In addition to winning, players may get 3-level jackpots.

Teen Patti is a popular game not only in India, but in the whole Asia and throughout the world. Simple rules, oriental vibe, and easy-to-remember combinations make this game one of the most beloved card games. By adding Teen Patti to the portfolio, TVBet aims to diversify its services kit, gain new partners and attract new bettors. At the moment, Teen Patti is the 13th game in TVBet’s portfolio.