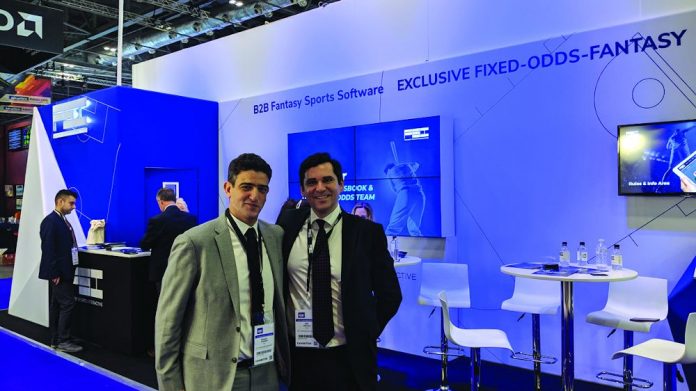 Launching its fixed odds solution at last year’s ICE London, Fantasy Sports Interactive promised a fantasy sports offer that bookmakers could market to the masses, and at this year’s expo, FSI’s CEO Dennis Tsalikis and COO Bill Mexias were back with a growing client list to prove it.

After signing deals in Germany and Austria with Cashpoint, and in South Africa with Hollywoodbets, Fantasy Sports Interactive attended ICE London 2020 keen to further expand the market reach of its Fixed-Odds-Fantasy product. The first-of-its-kind fantasy sports offer, which debuted at last year’s ICE, allows players to bet against the house rather than against each other, combining the strategy of fantasy leagues with the convenience and flexibility of fixed odds betting.

It’s a product that’s finally giving bookmakers the ability to offer fantasy sports to the mass market, and with a few strong partnerships already secured, FSI’s CEO Dennis Tsalikis and COO Bill Mexias returned to the ExCeL last month with more markets on their radar.

“We’ve got a contract with Cashpoint in Germany and Austria, and this month Hollywoodbets will be the first one opening with a full portfolio of our fixed odds solution,” explained Tsalikis.

“We are now targeting the UK market, which loves fantasy sports, as well as New Zealand, Australia, and the USA, all of which we’ve had productive meetings about at the show. Especially for the US market, our odds-based offering allows operators to offer a product that is very popular, without getting into direct competition with operators like Draftkings and Fanduel, making it the perfect option for new market entrants, local casinos and state lotteries.”

To appeal to more players in such markets, FSI are expanding the sports they cover, with basketball already developed and ready to go. In the next sports season, the company also plans to launch NFL, and baseball, ice hockey and cricket are all firmly on the horizon.

While this expansion is important in bringing fantasy sports up to the same level as live sports betting, the key to FSI’s growth over 2019 has been the fixed odds solution, which is much more beneficial to operators than the typical fantasy sports model. “The typical model is a pool model where everybody participates in a contest and, depending on the position on the leaderboard, they get some rewards.

However, this was not very useful for operators, especially as they had to guarantee the rewards to get enough people to participate, which created a huge marketing overhead,” explained Mexias.

“With Fixed-Odds-Fantasy, operators don’t have this kind of marketing cost as the users play against the house rather than other users. It’s a product that sports betting operators understand, as they are used to managing the odds and the risk, so it’s a very good fit for them.”

Importantly, the fixed odds solution keeps the core appeal of fantasy sports – the strategy, the community, and the prizes – but it also adds the ability for operators to offer single event markets on specific athletes, so players can bet on the performance of athletes versus themselves, or versus other athletes.

Mexias detailed that the key to fantasy sports, and what FSI do best, is the data feeds and algorithms that create the scores and decide who wins. “It’s crucial to use very detailed statistics, which is why we partner with Tier 1 statistics providers to power our solution,” he said.

“We utilise the same technology that traditional sportsbooks use for in-play, allowing players to watch the progress of their team and the statistics of each individual athlete as the game goes on. Everything is measurable and because of that players really get invested in understanding the performance of teams, especially when there’s money to be won.”

Indeed, FSI is confident that Fixed- Odds-Fantasy will be as engaging for players as the traditional fantasy sports model, while also being similar enough to the traditional sports betting model to capture the attention of sports bettors.

“We’ve developed a fantasy odds feed to enable our customers to offer their clients with fantasy sports betting markets as part of their sportsbook, combinable with traditional markets in accumulator bets,” added Mexias.

This view has been endorsed by OPAP in Greece (the Greek Lottery), which will open FSI’s fixed odds offer to 4000 stores in Greece on over 12,000 SSBTs. “We are the first B2B fantasy software provider that has a presence in retail stores, also with a pen and paper option – which is interesting,” concluded Tsalikis, crediting the new product for this achievement.

“From the start, Bill and I knew that if we wanted fantasy to be a standalone product for the mass market, it had to be a fixed odds solution – but also online and retail.” With the openings in Greece and the deals in Central Europe, Fixed-Odds- Fantasy has proven that fantasy sports has been an under-developed vertical for operators on the continent.

As the new decade begins, Tsalikis and Mexias now look to share this success story across the globe, giving sports betting operators from the US to Australia the opportunity to offer fantasy sports to the masses.