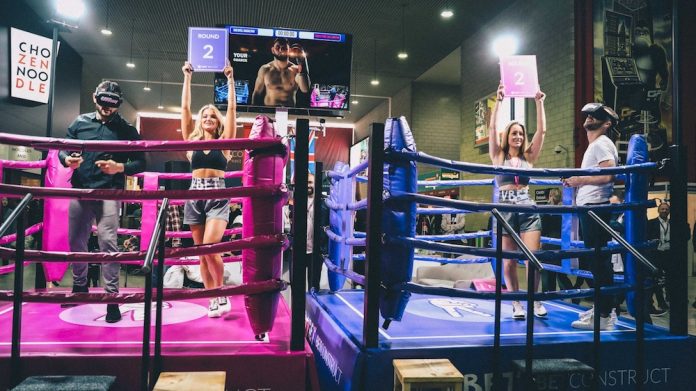 Starting life in the South Caucasus almost two decades ago, Armenian solutions provider BetConstruct has expanded its influence of the industry both East and West, with two hemispherical domes at ICE London 2020 illustrating the company’s 360° approach to markets across the world. Key to this vision is BetContruct’s ability to consistently deliver genuine innovation, with Chief Product Officer Edgar Mkrtchyan highlighting the company’s wide range of launches in London last month, which included a training academy, an industry content aggregator app, and a VR Fight Club among others.

BetConstruct came out swinging at ICE London 2020 with a wide range of launches including an industry training academy and VR Fight Club, making ExCeL’s main corridor home to one of the show’s most exciting attractions.

Inside the hall on BetConstruct’s official stand, there were more interactive concepts for attendees to explore, including its latest company concept: East and West. It represents the idea that BetConstruct’s high diversity now appeals to almost any player and operator around the world, with 15 offices across the globe testament to that. Such a reach, explained Product Officer Edgar Mkrtchyan, can only be achieved by utilising emerging tech to deliver genuine innovation.

“We are using the latest technologies – virtual reality, artificial intelligence, machine learning, blockchain – along with our vast experience and knowledge in the industry to really push the boundaries” he said, adding that the latter was essential for their new educational offer, BetConstruct Academy.

“We’ve been in the industry many years and have the experience to share,” he continued. “In BetConstruct academy, anyone in the industry will be able to study in any field, whether its risk management, project management, trading and so on. People can find a lot of info on the internet, but if they are hiring traders, actually delivering this training isn’t easy. Our academy will provide both theoretical and practical knowledge, with lectures alongside training sessions with our team for real life experience. After the training course, the traders will have everything they need to get going.”

In the same vein, BetConstruct has also launched a content aggregator, SpringBME App, for industry stakeholders to keep up to date with the latest gaming news. Downloadable as a mobile app on iOS and Android, SpringBME App also hosts its very own voice assistant, which can be asked questions about the industry which it will learn to answer better and better the more it is utilised.

“This is not only a place where all our operators can manage their entire business, but also a compass for anyone in the industry to get news, analysis and support,” said Mkrtchyan. “The app also includes our voice assistant Hoory, which answers to a lot of different questions concerning gaming and betting. If Hoory doesn’t know something, it directs to our experts, but with machine learning, the system is always becoming smarter with each interaction.”

While the industry is set to benefit from both BetConstruct Academy and SpringBME App, players will have new games to choose from in the form of VR Fight Club and one of the industry’s best social sportsbooks. While the latter will fill an overlooked gap in the market, VR Fight Club is something only a few companies would be ambitious enough to attempt. It offers a realistic player versus player boxing simulator, allowing its users to battle and bet in the ring against real opponents.

“VR is being used in almost every industry in some way, but VR Fight Club really brings out the best of the technology for the gaming industry,” said Mkrtchyan. “It’s a game, a sports betting product, and a workout routine all rolled into one, and it allows players around the world to engage with each other in a truly meaningful way.”

BetConstruct’s sister company, FeedConstruct, also showcased its new release, DeePro, at ICE London 2020. A deep data collecting tool for basketball, DeePro has been designed to help analyse a team’s performance, indicating the effectiveness of decisions made by coaches and the results of players’ training routines.

“Our tool takes into account all the intricacies of the game, all the minute details and features in order to deliver reports and game statistics including individual player data,” said Mkrtchyan. “It’s designed to perform via automated hot keys and special functionalities which allow the scout to collect and process deep data easier and faster.”

With a tradition of launching grand innovations at ICE London, BetConstruct didn’t disappoint in 2020 as the company continues to deliver results for clients from both the East and West – all while launching educational products to help industry newcomers do the same.