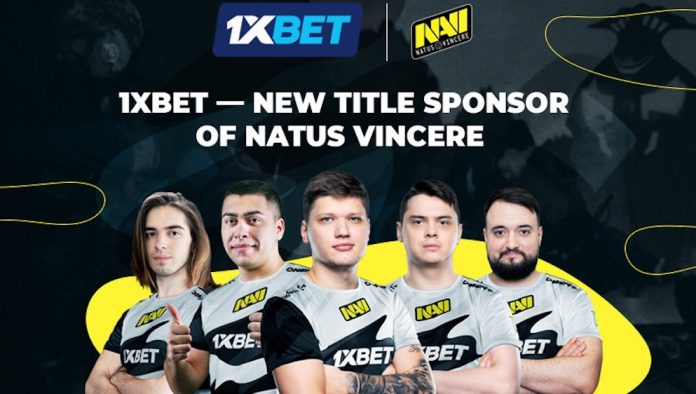 As one of the fastest growing companies in the betting industry with offices in Europe, Asia, Africa and Latin America, 1xBet is continuing to build its footprint across the gaming spectrum with its latest sponsorship agreement with Natus Vincere (NAVI).

NAVI and 1xBet are both confident that the cooperation, which is currently set for a minimum of one year, will be effective, given the immense potential of both brands. The contract is set to provide 1xBet support for NAVI teams in various eSports disciplines, including Dota 2, CS:GO and other popular games. 1xBet and NAVI also plan to carry out a series of powerful promotions and campaigns.

Since inception, the NAVI club has won more than 40 eSports trophies across a variety of disciplines and has set several world records, many of which still stand today. The team excels in such eSports disciplines as Counter-Strike: Global Offensive, Dota 2, PUBG, Rainbow Six, Apex Legends and more.

One of the largest Esports teams in the world, NAVI is excited by the possibilities stating that the new partnership is more than just an agreement according to the team’s CEO, Yevhen Zolotarov, it is an inspiration. He explained: “If I had been told recently that NAVI would work with 1xBet, one of the largest betting companies in the world, and a partner of such an iconic club as FC Barcelona, I would not have believed it. Now it has become a reality and the partnership between Natus Vincere and 1xBet inspires us incredibly. Welcome to #NAVINATION!”

1xBet offers its customers the largest number of events in the eSports line, both pre-match and in live mode. In recent years, the company has signed partnership agreements with renowned eSports organizations such as HellRaisers Esports, Cascade Esports, Pro100, CIS Esports League and Gambit Esports. Previously, the company has entered into agreements with a number of well-known partners, including the Spanish La Liga, the Italian Serie A and Barcelona football club.

Commenting on this latest partnership, which will see the brand continue to expand within the growing eSports sector, the 1xBet team said: “1xBet has been focusing on supporting eSports for many years, which is one of the fastest growing betting industries. Competitions in various disciplines daily attract the attention of hundreds of thousands of fans from around the world.

We really like this dynamic field of interest and 1xBet was attracted by the idea of cooperation with an eSports organization which is known throughout the world. The full name of the team Natus Vincere means “born to win.” This perfectly describes our audience – players who bet on eSports and other sports with 1xBet every day. ”

In Q1 of 2020, NAVI will make history as one of the eight eSports teams competing for a $250,000 prize draw at ICE London 2020 as part of Clarion Gaming’s professional eSports tournament.

Taking place within an 800sqm state-of-the-art Esports Arena at ExCeL London, UK, the tournament will be live broadcast to an online global audience in excess of 5 million. NAVI is just one of world leading teams in the running for the Counter Strike (CS:GO) prize at ICE London, where 1xBet will be showcasing its full portfolio of betting solutions and affiliate platform services on the showfloor at Stand S3-250.