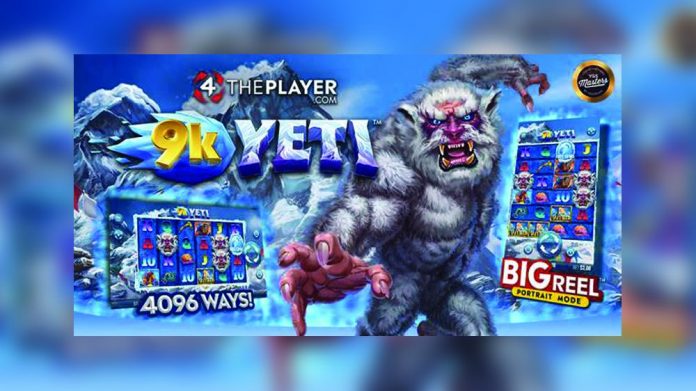 4ThePlayer.com, is taking players on an epic expedition with the launch of its first slot release via Yggdrasil’s YGS Masters, the content initiative’s fourth title of 2019.

Players can encounter the mystical Yeti and experience mountains of wins of more than 9,000x their stake in this 4,096 ways slot.

Stuart McCarthy, Head of Studio Partnerships at Yggdrasil, said: “We’re delighted to be launching our fourth YGS Masters slot of the year with 4ThePlayer.

“Together we have created a fantastic mobile-first game that players will instantly take to and want to come back to time and again.”

Discover Yeti footprints and trigger free spins with a snowstorm feature where any losing spin can be transformed into a guaranteed win. Players can be stuck in the storm for a while with up to 88 free spins triggered complete with an abundance of retriggers.

This monumental game also features an industry-first innovation – Big Reel Portrait Mode bringing portrait play to life – using up to 70% of the screen compared to the normal 20 percent. Stacking the reels on top of each other and spinning right to left, the feature creates an immersive experience never seen before in mobile play.

Andrew Porter, CEO of 4ThePlayer.com, said: “We are very proud of our first slot release. Being players ourselves we have spent a lot of time making sure it’s a game we would want to play. Adding the excitement and big win potential we want from games.

“It’s particularly pleasing to create a user-friendly portrait play with our industry first Big Reel Portrait Mode creating a portrait play that players can easily see, engage with and enjoy.”