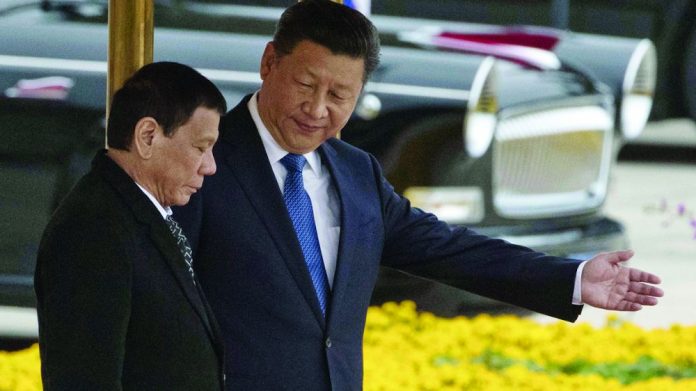 After a tense meeting between the two leaders, Philippine president, Rodrigo Duterte, is criticised for yielding to his Chinese counterpart on drilling in disputed seas – a compromise that has allowed him to fend off calls to ban online gambling.

After mounting pressure from Beijing, Philippine president Rodrigo Duterte has rejected China’s request to shut down its online gambling sector – saying it is too beneficial to forgo.

His comments came after a sensitive summit with Chinese president, Xi Jinping, in late August, where the two leaders met to discuss infrastructure investment, China’s ambitions for oil and gas exploration in the disputed South China Seas, and the heating issue of online gambling.

Asked about the latter in a press conference after the meeting, Duterte tersely briefed reporters: “I decided that we need it. Many will lose jobs.”

Offshore licences, POGOs, issued by the Philippine gaming regulator are expected to contribute around $150m to the state’s treasury this year – from licence fees alone. Moreover, an estimated 350,000 people work in the sector, including at least 120,000 Chinese nationals.

China’s plight surrounds the treatment of Chinese workers – 14,000 of whom are now said to be undocumented and employed illegally, and the fact that many of them man call centres and live casino studios for firms that target palyers in mainland China, where gambling is illegal.

Cambodia also began shutting down offshore gambling operators last month, and similarly, only after requests from Beijing were laid out in January.

With the ban well underway in Cambodia, and Chinese workers already fleeing the country for fear of arrest, the prospects for a significant portion of Asia’s online industry hung on Duterte’s meeting with Xi.

Yet Duterte told reporters he had listened to Xi “out of courtesy.” Only he would decide what was “to the benefit [and] interest of my country.”

Neither issue can be taken in isolation, however. China’s claim to the South China Sea (everything north of the so-called nine dash line) overlaps into the Philippines’ waters by hundreds of thousands of square miles – and area which Xi would like to drill.

Duterte has to date been resisting Xi’s advances, armed with an arbitral ruling from the UN in 2016 expounding China’s claim as illegitimate.

According to Ben Lee, managing director of the Macau-based gaming consultancy, IGamiX, the reason online gambling was not pressed in the summit, was precisely because the South China Seas are more important to Xi than the online gambling issue – getting tough on the latter will make the former harder to pursue – notwithstanding the trade war that broke out with the US in 2018, “for which China needs more friends and allies.”

“Online gambling represents a problematic leakage for China’s economy, but at the same time they’re mindful of the strategic position that they need to hold vis-a-vis the US, which is why we’ve got warnings rather than action,” Lee considered.

An evident closening of ties since the summit also bodes well for the future of POGOs. Duterte has railed against the online sector since coming to power in 2016. Yet POGOs have flourished since then, and so have the revenues, leading him to vow to protect the sector earlier this year – as long as they pay their taxes.

He is now coming under fire domestically for u-turning of the Seas issue – apparently softening his opposition to Beijing’s ambitions to drill there. By mid-September he had suggested he may be willing to “ignore” the UN’s 2016 decision, in order to “pursue economic activity” with Beijing.

Duterte recounted that Xi had made him an offer of splitting resources gained from the exploration 60-40 in his favour, if he would drop the arbitral ruling. “They would only get 40,” Duterte assured, “that is the promise of Xi Jinping.”

His critics at home have blasted the move as unconstitutional – even “betraying the sovereign rights and interests of the Filipino people” – but in return, he has been able to shake off calls to ban online gambling – with no reprisal.

Arrests of illegal operators and undocumented staff have been made in Manila, Lee noted, and the Inland Revenue had also begun cracking the whip on tax-owing POGOs, “but overall, the growth in the POGO sector continues unabated.” And the closer China and the Philippines cooperate economically, the “less likely” Beijing will be to put pressure on POGOs further down the line – “apart from token efforts,” Lee added.