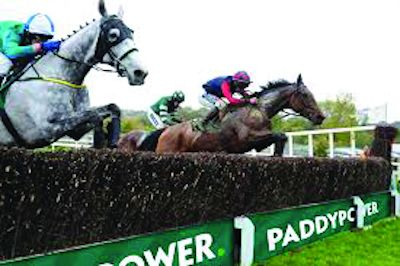 Flutter CEO Peter Jackson gets glum on the prospects of a no-deal Brexit, which could make it harder for horses to travel between the UK, Ireland and France – impacting an estimated 40 percent of its sportsbook revenues.

Racing markets could give even more weight to favourites after a no deal Brexit, as Flutter CEO Peter Jackson expresses concerns that horse may have difficulties crossing the Irish Sea.

The roughly £11.5m bets taken on British horse racing each year, across circa 1,500 race fixtures, rely heavily on a stream of Irish horses – often longodd runners in small fields – but which could be in jeopardy if freedom of movement is restricted in the absence of a withdrawal agreement.

“I do have some concern about horses being able to travel backwards between UK and Ireland, said Jackson, “it is a real risk to the horseracing industry.” One concern, echoed by Greg Johnson of Shore Capital is that any disruption to movement could make it harder to have smaller horse racing fields – “so the favourite will win more often” – which could mean less of a lure for casual punters, less bets placed and less volume for bookmakers.

Others in racing were more bullish on a no-deal scenario accusing those who complain about it to “by and large, have vested interests and see it through Irish eyes.” “Where they see Brexit as a disaster, rather than the realistic outcome, which is no one wants there to be a difficulty of transporting horses between Ireland, Britain, France and Europe,” said David Redvers, racing manager of Qatar Racing.

“The entire industry will work together to overcome that.” Flutter’s sportsbook is thought to rely on racing for 40 percent of its revenues – largely due to activity on the Betfair exchange. However, the tripartite agreement between the UK France and Irelant, that allows movement of thoroughbred horses between them goes back decades – before the UK entered the single market in 1973.

The British Horseracing Authority said it had assurances from the government that there would be no additional checks on horses entering the UK in a no-deal scenario – and was working with Ireland and France to ensure this is reciprocated.

“The principle movement would be around thoroughbred auctions. We want to continue to attract the best thoroughbreds to race here and for breeding,” said Will Lambe, BHA executive director.

Flutter’s revenue rose 18 percent year-on-year (to £1bn) in the first half of 2019 – although profits slipped by 24 percent.

A 46 percent hike in US revenues helped – rising from £61m to £160m – thanks to the timely acquisition of FanDuel in February last year.