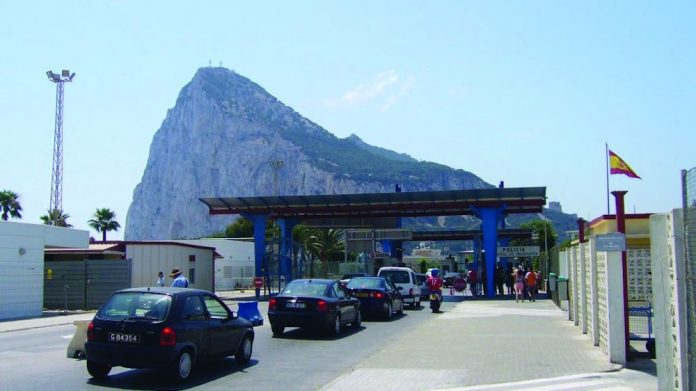 A leaked government document claims that commuting across the border from Spain to Gibraltar each day will become infeasible for several months after a no-deal Brexit – however Gibraltan ministers say the file’s claims predate the extensive work since completed to minimise the damage.

Gibraltar has underprepared for a no-deal Brexit, claims a UK government document published by The Sunday Times – leaving it open to major restrictions in the flow of goods and people across the Spanish border.

The so-called Operation Yellowhammer dossier, which lays out all the likely scenarios should the UK crash out of Europe without a withdrawal agreement, claims that the 15,000 frontier workers that cross the border to work in Gibraltar each day could face delays of “four-plus hours for at least a few months” after no-deal event.

The document also claims that shipments of waste, food supplies, medicine and other goods could be severely disrupted, which together would “adversely impact Gibraltar’s economy.”

“Despite the time extension to the UK’s exit from the EU, Gibraltar has still not taken the decisions to invest in contingency infrastructure (such as port adjustments and waste management equipment),” the document read. “And there are still concerns that Gibraltar will not have passed all necessary legislation for no-deal, opening up legal risks mainly for the government of Gibraltar.

“Gibraltar continues to plan for less significant border delays than in our Yellowhammer scenario,” it warned, adding that other crown dependencies may be affected by supply chain disruption,” it added.

The government in Gibraltar has since hit back at the leak, saying the projected worst-cases in the Yellowhammer file were “out-of-date,” and had mostly been addressed in the interim.

In a statement, the government said initially it had “quite rightly” attempted to avoid the costs of overpreparing for a no-deal that may not occur – but has increased its efforts as the scenario has become more likely.

For example, it said work had already been commissioned for extra maritime traffic should it be necessary to import goods by sea, though “we do not anticipate this will be needed”.

“We do not want a no-deal Brexit,” Chief Minister Fabian Picardo said. “We think it is bad for Gibraltar. We are, nonetheless, now ready for it […]

The matters raised in the outdated Yellow Hammer leak have already been responsibly addressed in detail. Those are assumptions based on ‘worst case scenarios’ which we have come up with ourselves.

“As a responsible Government, we plan for the worst case scenarios, even though we are confident they will not occur.” Meanwhile Deputy Chief Minister Dr Joseph Garcia, said that a no-deal scenario had unfortunately become the “more likely short term possibility.”

“Being out of the EU, especially falling out without a Withdrawal Agreement, is not a bed of roses and there will be some disruption,” he said.

“A no-deal Brexit is bad for Gibraltar and it is bad for the United Kingdom and the EU. I urge all parties to work to avoid such a scenario.” However he assured residents and businesses that the “resolutions and mechanisms for future flows have all now been put in place.”

We do not envisage any problems with the disposal of waste.” “But those are the planning assumptions we have responsibly prepared for. That’s why we are ready for the outcome we do not want to see and that we hope will be stopped by any means necessary.”