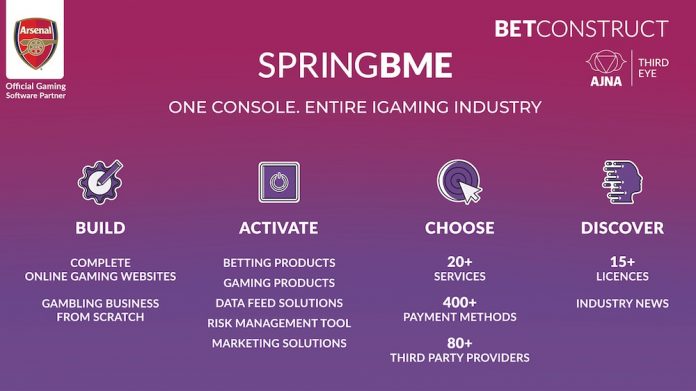 Ahead of this year’s iGB Live in Amsterdam, BetConstruct will be celebrating the second anniversary of its gamechanging management tool, SpringBME, which brings an entire suite of betting products, tools and games together in a single dashboard.

In July 2017, BetConstruct sent waves across the industry with the launch of its comprehensive management tool SpringBME. From that point on, it was only a matter of time until the platform became a fully automated and supremely advanced environment for online gambling businesses around the globe.

When it was first premiered, SpringBME became an immediate industry sensation by delivering the entire suite of tools needed to launch and successfully operate an iGaming business through a single comprehensive infrastructure. Now, two years later, on 16 July, BetConstruct will be hosting a celebratory dinner in Amsterdam ahead of iGB Live in honour of SpringBME’s second anniversary.

Two years after its initial launch, BME continues to be an ever-advancing project. Every stage of its development has seen the team put in place a number of creative enhancements, all designed to facilitate effortless business management for operators. During the company’s special evening on 16 July, BetConstruct CEO and founder Vigen Badalyan will be discussing some of these important features and taking a deeper look at the cutting-edge yet intuitive technology at the very heart of SpringBME. During the show itself, from 17- 19 July, BetConstruct will be taking attendees through its A-to- Z of establishing a successful and profitable iGaming business.

iGB Live is one of the most prominent dates in the iGaming calendar where BetConstruct regularly showcases its full spectrum of gaming and betting products, alongside additional solutions and tools that can take any business to the next level.

Next to its powerful sportsbook, one can find CRM systems allowing operators to craft effective campaigns and BetConstruct’s latest AI-powered risk-management tool which can yield significant results within just three months of use. Both solutions are meticulously designed to make the entire sportsbetting experience safe and smooth for operators and their players. And with the expertise of in-house data-feed supplier FeedConstruct supporting every one of its sportsbetting products, BetConstruct’s sportsbetting offering delivers a perfect symbiosis between rich data and smart technology.

When it comes to diversity, however, BetConstruct’s gaming suite deserves special attention. Inspired by popular games from around the world, the development team got their creative juices flowing and launched online games inspired by local classics such as Farkle, otherwise known as Zonk, Keno with a number of variations, bet-on lottery game Talisman and a sporting quiz game BetFights which currently has no analogue on the market. Hitting the stand for the first time, iGB visitors will also encounter three newly launched Live Casino games originating from the Indian subcontinent: Andar Bahar, Teen Patti and bet-on Teen Patti.

A handful of other noteworthy iGaming-focused brands will be also presented at iGB Live, such as FastShift payment gateway, which guarantees immediate and safe money transfers for all involved parties – players, game providers, operators, and affiliates – around the clock. Attendees of iGB Live will also be able to learn all about Fasttoken, a fully decentralized all-in-one betting and wagering solution that is shaping the casinos of the future with 100% transparency, security and fairness.

The whole scope of BetConstruct’s products can be found in SpringBME, a perfect fusion of every aspect of the sportsbetting and gaming worlds, concentrated in a single environment. The platform is celebrating its second anniversary this year and Bet- Construct, together with its guests, will travel back to BME’s launch day, recalling its promise to revolutionise the iGaming world and reflecting on the achievements and improvements of the past two years.