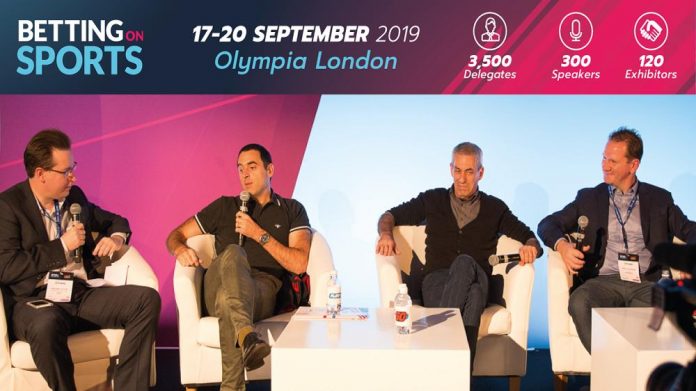 The 2018 Sports Betting Leader of the Year Sergey Portnov will be kicking off the Sport in Focus track at this year’s Betting on Sports conference.

Sport in Focus is one of four tracks held on the first full day (18 September) of SBC’s flagship conference, which takes place at Olympia London from 17-20 September.

Portnov, who took home the prize at last December’s SBC Awards, will be discussing the huge potential for mixed martial arts, now that the ‘fledgling’ sport – if only in a betting sense – has built up such a big global following.

His company Parimatch has significantly expanded its brand profile through the Ultimate Fighting Championship, the largest MMA promotion company in the world, having signed both Conor McGregor and Alexey Oleynik as brand ambassadors in 2019.

Following Portnov to the stage will be Pinnacle trading director Marco Blume, rated as one of the best speakers from last year’s event, as he joins a panel about esports – ‘the major sport you are not carrying’ – alongside the likes of Brett Abarbanel, Director of Research at UNLV International Gaming Institute, and Serge Vardanyan, Founder and CEO at WIN.

The third of seven Sport in Focus sessions will debate how operators can plan for the biggest European football championships in 2020. OPAP Sports Betting & Trading Director Thanos Rigas and Kindred Group Head of Sportsbook Erik Backlund are already confirmed for this session, alongside Jens Nielsen, sports betting director at Danske Spil.

“Congratulations on a very good conference,” said Nielsen after last year’s #boscon – also held at Olympia London. “I find it a very useful event to attend, both in respect of supplier stands for meetings and interesting panels and speeches.”

Cricket will take centre stage first up after lunch, as the likes of Black-op Gaming Head of Sportsbook Chris Duncan, Paddy Power Betfair Sports Trading Team Lead Simon Cox and Grant Fraser, CEO & Co-founder at Digitonic, discuss which operators made best use of the sport’s shop window summer, in which both the World Cup and Ashes come to England.

The penultimate session will analyse the impact of the data blackout at the lowest level of professional tennis. It will feature David Lampitt, Managing Director of Sports Partnerships at Sportradar, who argued that the Independent Review Panel (IRP) proposal to discontinue the sale of live data at the sport’s $15k developmental tier didn’t stand up to scrutiny.

Lampitt will be joined by experts such as e|motion sports Managing Director Simon Schleich and Rob Blakeley, Head of Tennis at Sky Betting and Gaming.

The final furlong of the track will turn back to the racing family, but this time with a nod to greyhounds. WatchandWager.com CEO Ed Comins and Adrian Molloy, General Manager – Wagering at Greyhound Racing NSW, will test the hypothesis that too many different formats are harming the prospects of the sport that is ostensibly built for betting.