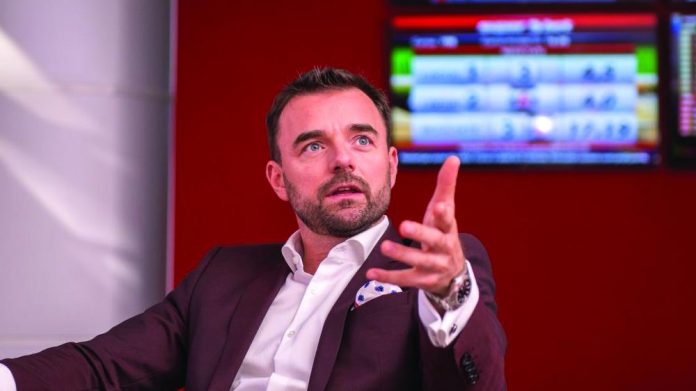 Quickly becoming a household name in Central and Eastern European, Romanian bookmaker Superbet has won the seal of approval from US investment fund, Blackstone, along with a E175m cash injection.

Rising star in Romanian gambling, Superbet, has secured a E175m investment from US investment fund, Blackstone.

In return, the Blackstone Tactical Opportunities (BTO) division is taking a minority stake in the promising firm citing its “impressive” strategies and technology of “international industry standards.”

The Superbet Group, cofounded in 2008 by Sasha Dragic, began operations locally not much more than a decade ago and has since continued its expansion at European level.

Sacha Dragic, co-founder and CEO said he was “anxious to start this strategic partnership with Blackstone.

“Capital infusion from the US fund, backed by rich experience, makes Blackstone a partner capable of supporting the Superbet Group to maintain its market leadership in Romania, to continue to increase its market share and, above all, to be able to capitalizing on opportunities to expand business in both Central and Eastern Europe and globally.”

Superbet operates a network of over 1,200 national betting agencies, with 3,500 employees, and launched the digital platform in 2016, and in the fall of 2018 the mobile application.

In 2017, the company officially launched its operations in the Polish market where it now holds retail operating permit for 50 betting points. Today, Superbet also has direct operations outside Poland, but also offices in Austria, Serbia, Croatia, Malta and the UK.

In 2017 Superbet made E130m, and by the end of last year, governance officials estimated a 40 percent increase for 2018.

According to managing director, Vlad Ardeleanu (pictured), the firm’s product has been well proven in Romania, and now also in Poland. The firm has its sights firmly on geographical expansion, but only financing is hold it back.

“We want to invest,” he told local financial media only a month ago. “Although we are profitable, we still need capital for international exposure.”

Andrea Valeri, senior managing director at Blackstone, said it was “impressive that the Romanian company has invested in multi-channel and digital operations, including the launch of its own online gaming and betting platform, all made to the international standards of the industry.

“We are anxious to support the upward trend of Superbet, whose growth model is based on international expansion and continued technology investment” and “delighted to be able to start working with Sacha Dragic and the excellent management team he has created at Superbet.“

Blackstone – one the largest funds in the world, managing assets in the region of $500bn each year – has been steadily acquiring assets in gaming over the last few years. With Blackstone Tactical Opportunities specifically focusing on minority investment in target companies.

Most notably, in 2017 it made long-term investments in Paysafe Group, which processes huge swathes of the gambling sectors payments, and gambling media outfit, Clarion, which runs ICE. More recently it invested Grupa Cirsa, Spain’s largest casino operator, and Murka Entertainment, a Ukrainian developer of social and mobile games, including various casino and slots titles.

In 2014 Blackstone was the principle backer of Amaya Inc’s $5bn takeover The Rational Group – the former operating company of PokerStars – a move many saw as kicking off the succession of M&A in the years since.