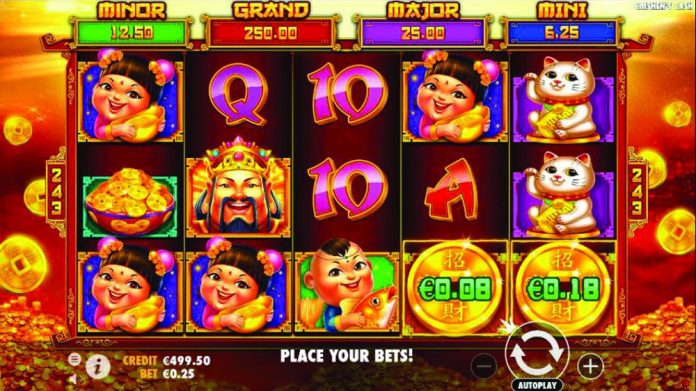 Software provider Pragmatic Play has announced the latest addition to its HTML5 video slot portfolio in the form of Chinese-themed title Caishen’s Cash.

The 5×3 video slot features symbols from Chinese folklore, with “hoards of coins” littering the sides of the reels, as well as a specially-composed soundtrack designed to add an immersive feel to the game.

“With gold coins filling the reels, the Chinese God of Wealth offers both excitement and the potential for big prizes.” “With its immersive gameplay and engaging bonus modes, Caishen’s Cash is sure to be a popular title with all of our players.”

Once the bonus feature is triggered during the game, players are able to choose between a Money Respin round or the Free Spins option.

The Money Respin sees a number of different coloured coins hitting the reels, which can significantly increase the win total.

Caishen’s Cash also features a Jackpot Bonus game, where players are able to pick coins to reveal jackpots, with players having to match three to win.

Players can then win one of four major jackpots as the God of Wealth oversees proceedings.

Caishen’s Cash is the latest addition to Pragmatic Play’s wide-ranging offering and follows the recent launch of The Dog House, part of the company’s regular release schedule of three new titles per month, set to expand to more frequent releases before the end of this year.

The games are available in all currencies, 26 languages and all major certified markets, and are accessible by operator partners via a single API, which also includes bingo, scratchcards and live casino games.