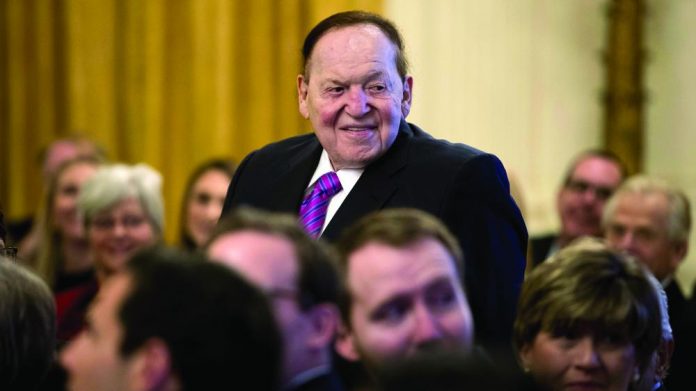 The state of New Jersey has filed a lawsuit against the US Department of Justice, for failing to comply with an FOI request that all communications with super donor Sheldon Adelson, or members his anti-online gambling lobby group, be made public.

New jersey is suing the Department of Justice, after officials failed to provide answers about casino magnate Sheldon Adelson’s influence in reinterpreting the Wire Act.

The Garden State’s attorney general, Gurbir Grewal, filed the lawsuit with a District Court in early May, accusing the DoJ of refusing to comply with a legally binding Freedom of Information Act request, which sought all documented communications between itself and members of Adelson’s anti-online gambling lobby group.

The FOI request was filed back in February, soon after the DoJ published a fresh opinion on the 1961 Wire Act which would outlaw many forms of online gambling, including state lotteries where transmissions cross state lines – a move Adelson has long backed.

“Online gaming is an important part of New Jersey’s economy, and the residents of New Jersey deserve to know why the Justice Department is threatening to come after an industry we legalized years ago,” Grewal said in a release.

“It’s especially important that we figure out whether this federal crackdown is the result of a lobbying campaign by a single individual seeking to protect his personal business interests.”

Grewal added that online gaming in New Jersey has generated more than $2bn in revenue and $153m in taxes since its was liberalised in 2011.

After the DoJ published its new opinion in January, rumours have circulated of Adelson’s influence, largely due his close ties with US president Donald Trump, and record of lobbying DoJ officials to offer such an opinion. Moreover, there are few others left within the industry, or even state legislatures, that favour an online ban.

In the February request, Grewal alongside Pennsylvania’s attorney general, Josh Shapiro, argued that the new opinion “tramples over the law and states’ rights […] to upend the settled expectation on which we have been relying of near a decade.”

“We can see no good reason for the Justice Department’s sudden reversal,” they continued, and expressed concern that the drafting of the new opinion “followed substantial lobbying by outside groups.”

While refusing to produce evidence, the DoJ has strenuously denied untoward interference.

“The 23-page opinion reflects the Office of Legal Counsel’s best judgment of the law,” said Nicole Navas Oxman, a Justice spokeswoman. “The accusation that the opinion was shaped by any outside interest is baseless and offensive.”

Adelson, who says he opposes online gambling because it leads to addiction, is one of the Republican Party’s largest donors. He has lobbied against online gambling in state houses and with federal bodies, although a source close to Adelson claims he has never personally asked Trump to enforce a ban.

In October, Adelson and his wife Miriam donated $500,000 to a fund set up to help pay legal expenses incurred by aides to the president who had been drawn into the Russia investigation, tax records apparently show. A month later, Trump awarded Miriam Adelson the highest civilian honor, the Presidential Medal of Freedom.

That lobbying for a reinterpretation took place is not disputed. The contents of the new opinion closely mirrors a memo written in 2017 by Charles Cooper, a former head of of the DoJ’s Office for Legal Counsel, and member of Adelson’s lobby group the Campaign to Stop Internet Gambling.

Cooper was himself former attorney general Jeff Sessions’ long-time friend and personal lawyer. Sessions, who had stated in his 2017 confirmation hearing he was intent on reinterpreting the Wire Act. but was later forced to recuse himself of meddling with it when his connections to Cooper transpired.

Cooper has since admitted to lobbying the DoJ to reinterpret the Wire Act, and expressed his satisfaction that the opinion published in January largely matched his own, saying it “accords entirely with the analysis my firm undertook and I shared with the DOJ.”

Spokespeople for Adelson, Las Vegas Sands or his lobby group, the Campaign to Stop Internet Gambling have still not responded to the claims of interference or subsequent lawsuit.

NJ’s lawsuit notes that an expedited FOIA request should be fulfilled within 20 days, according to the DoJ’s own FOIA guide. It also argues that, despite a claim by DoJ that “unusual circumstances” surrounded New Jersey’s request, officials have still not given any justification for this characterisation.

The suit comes as the New Hampshire Lottery Commission is already suing the DoJ over the opinion, for shackling state’s rights and preventing them from being able to pass budgets that rely on lottery revenues. 14 other states joined New Hampshire in filing an amicus brief to this effect.