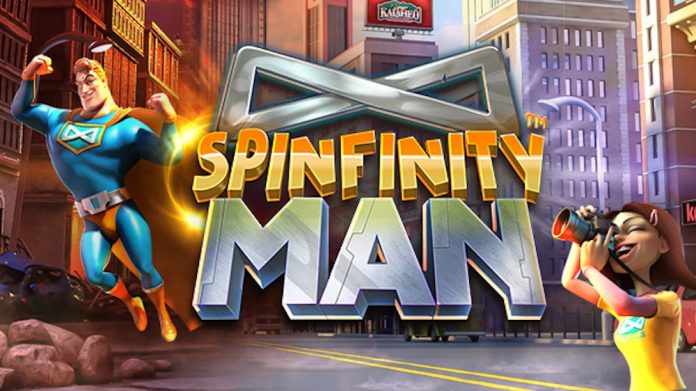 The market leader in cinematic casino content and gaming solutions, BetSoft Gaming, has announced the launch of its superhero-themed slot Spinfinity Man featuring a 7×7 cluster grid and wins of up to 5000x.

Spinfinity Man sees the titular hero use his superpowers to amass huge wins, but he’s also ready to face off against his evil nemesis: the dastardly Mr. X. providing players with the chance to win huge in the bonus rounds.

“Spinfinity Man is a fun, frivolous, feature-packed game built to capitalise on the huge appetite for superhero stories,” explains Annamaria Anastasi, Betsoft’s Marketing Director. “Each aspect of the title, from its outstanding character designs to its cinematic gameplay, has been carefully calibrated to attract and engage players.”

The company explained the gameplay in a story centred around the hero’s crimefighting capabilities in the hometown of Metropolis, stating: “While saving the city is no easy task, it’s not hard at all to get right into the action in Spinfinity Man. Upon launching the base game, you’ll instantly find yourself at home. Destroy 4 or more clusters of symbols of various values and enjoy your spoils. There are exciting cluster combos further enhanced by the powers of our hero: a laser eye that burns away columns, symbol-shattering ice breath and his telepathic powers which remove symbols to allow for a cascade of epic proportions!

“Deeds do not go unnoticed in Metropolis. The more you play, the greater the chance your fans will try and snap a picture of you! With the flash of a camera, a cluster of symbols will EXPLODE and trigger an immediate cascade. The evil Mr. X is zooming around the city; find him ten times by triggering the symbol during a cascade, and you will enter the bonus round!

Once our hero finds the trail, he’ll face off against his greatest nemesis: Mr. X, who has his arsenal of power. In the bonus game, every 2X2 animated symbol is replaced by one of Mr. X’s signature tricks, potentially setting up the fight of the century where players can win up to 5000x time their bet. All you have to do to face him yet again is collect an additional 10 Mr. X symbols.

If you’re feeling lucky, you can always choose to double up your winnings by flipping the coin of the city. You might win some, you might lose some, but when you don the cape of Spinfinity Man, there’s plenty of fun and action in this fast-paced, high-risk slots game.”

Spinfinity Man, the latest title from Betsoft Gaming, is out now.