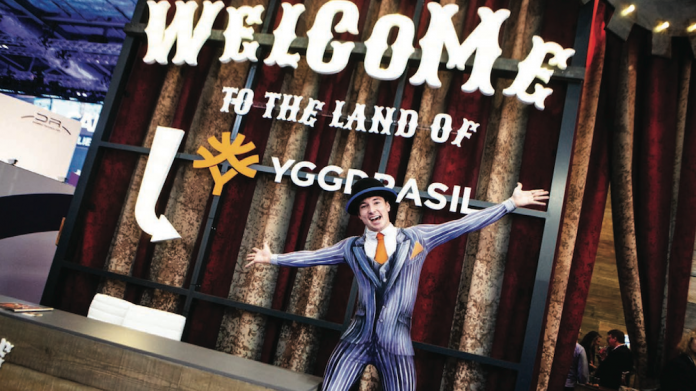 Showcasing the first games to come out of YGS Masters, Yggdrasil exhibited at ICE last month confident that its publishing initiative is empowering studios to deliver a curated roadmap of high quality content to operators.

Stuart McCarthy, head of studio partnerships at Yggdrasil, explained that YGS Masters has come on “leaps and bounds” since its launch last year, with games studios Northern Lights and Rabcat both displaying their upcoming YGS Masters games on the company’s stand.
“We are launching the first game from Northern Lights very shortly. It’s a very mechanical, feature-rich game and exactly what we are trying to achieve,” said McCarthy. “The feedback from UK operators so far has been great, and our northern European partners believe the game will absolutely fly in the Nordics, so I think we’ve got a hit on our hands with the first one.”
More games are set to follow in the summer, with games studio Fantasma almost ready to release its new content after joining YGS Masters last October. Indeed, the publishing initiative continues to move from strength to strength, with Chris Ash’s new studio 4thePlayer and Hong Kong-based studio AvatarUX also joining the fray just before ICE began.
“We’re trying to bring in as much flavour as we can to provide a much more diverse array of content,” continued McCarthy. “We’re bringing people on board, and we’re building the games directly onto our platform so they benefit from our BOOST tools, our commercial structures and our licensing capabilities, so we’re removing all those frictions for a young studio to get on board and get published.”
He added that studios have welcomed the initiative after looking for a new route to market for some time, and with Yggdrasil well-equipped to provide that route, McCarthy believes YGS Masters offers the ideal solution.
“We’re pretty advanced in terms of our tool sets and have been for a long time,” he stated. “You look around ICE, and a lot of people are still trying to copy what we’ve got, but they are trying to do it within a closed framework, whereas we are embracing all the studios that come on board and providing them with those tools.”
In turn, the studios have embraced YGS Masters. Partners of the initiative benefit from the sharing of talent, resources and ideas far more than they would through traditional publishing routes, sharing a close relationship with Yggdrasil that is designed to produce the best quality games on the market.
“We work very much on a collaborative basis, studios come up with fantastic game ideas, and then, based on what we know, we can help them tailor the games to our players’ tastes,” said McCarthy. “It’s all about relationships, it’s about making sure that we know partners really well, and constantly communicating with them. That’s why we are limiting the number of partners we bring on board. We don’t want 30, 40, 50 partners, that doesn’t make any sense to us, but getting to a good number of partners that produce consistently is what we are looking for.”
As such, not every studio is able to join YGS Masters. When working towards a new partner- ship, McCarthy undertakes a thorough vetting process to ensure the studio’s standards are aligned with that of Yggdrasil’s. In this way, when partnerships are secured, all parties involved are set to benefit, including the operators that get to host the resulting game content.
“The idea is that we all win together; studios get a route to market, we extend our relevance to more markets with the same high quality, but with more flavours, and operators get a curated, very considered roadmap of games coming through that they know they can depend on.”
As YGS Masters continues to grow, McCarthy is looking to expand its reach beyond smaller studios to start working with the industry’s larger IP holders. Indeed, Yggdrasil recently announced its intention to become a global content publisher, with no market or sector – including land-based – beyond its ambition.
“When people think about partnerships, we want the first publisher they think of to be Yggdrasil,” concluded McCarthy. “We deliver a high level of quality, we’ve got sophisticated tool sets, we’ve got great reach, and consequently we have the capabilities to build the best-performing games on the market.”