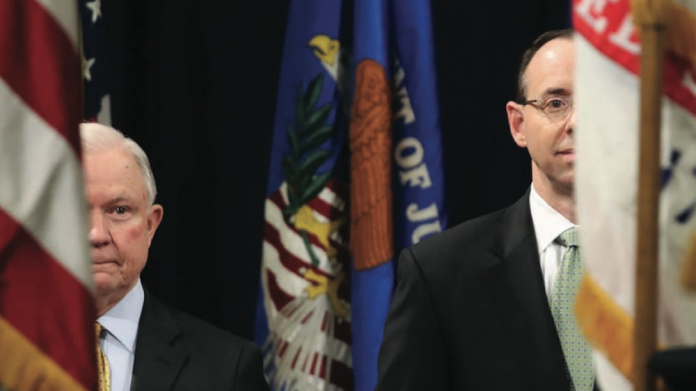 The DoJ’s reinterpretation of the 1961 Wire Act could impact lotteries, poker and mobile sports betting, lawyers say – but is likely to spend several years in court before being enforced.

American gaming stocks have returned to trend after a new opinion on the 1961 Wire Act sent shares sliding mid-January.
The Department of Justice’s precipitous reinterpretation of the sixty-year-old statute – which said all forms of internet gambling that use interstate transfers of funds or information are in fact illegal – had threatened to shackle huge swathes of the US’s online sector: from daily fantasy sports to state-run lotteries and commercial online gambling.
Yet market confidence has largely resumed, not least because this opinion is likely to spend years in courts of appeal before having any effect. But the legal consensus on those sectors implicated by it has also narrowed considerably since its publication.
“The initial thought was confusion, and the stocks on the day of the announcement were fairly volatile,” said Barry Jonas, director at SunTrust Robinson Humphrey.
“Right now there is a view that this may not be hugely material in the near term. But it does create uncertainty in the market, and the market certainly never likes uncertainty.”
Interstate poker – such as the tristate pact forged between Nevada Delaware and New Jersey last year – looks to be the most acutely impacted. Although it could also complicate operators that route bets to servers across state lines – namely ilotteries, but also the nascent mobile sports betting sector. Others have warned of the “chill- ing effect” this could have on state legislators’ efforts to liberalise other forms of gambling.
It is still unclear from whom this new opinion came, or for whom it is supposed to benefit. It was dated just four days prior to the resignation of attorney general Jeff Sessions who had vowed to “revisit” a previous opinion on the Wire Act from 2011, that had paved the way for ilotteries and regulated igaming across the US.
However, the issue should have passed to deputy AG Rod Rosenstein (pictured buy phentermine 37.5 mg no rx right), as Sessions was forced to “recuse” himself, when his close personal ties to Sheldon Adelson’s Campaign to Stop Internet Gambling were exposed. Sessions’ longtime friend and personal lawyer, Charles Cooper, turned out to be the Campaign’s chief lobbyist – the man charged with lob bying Sessions to make this very opinion.
In contradiction to the 2011 memo, the new interpretation primarily considers that the Wire Act applies to all forms of internet gambling. But it also goes further, seemingly to single out ilotteries by reinterpreting a provision in the 2006 Unlawful Inter- net Gambling Enforcement Act, that permitted transmissions across state lines, as long as they begin and end in-state.
According to Gordon Medenica, director of Maryland Lottery and Gaming, to process just one lottery ticket requires a “spiders web” of transmissions to different data centres “crossing all kinds of state lines.” Meaning this small detail could have huge implications for the state-run lottery sector.
“We shall see,” if existing lotteries “are challenged or shut-down”, he said, but for the expansion of ilottery “the chilling effect is already there.”
Anthony Cabot, distinguished fellow in gaming law at University of Nevada, said that despite the interstate nature of daily fantasy sports, firms should remain exempt, as long they continue to make the case they provide skill gaming, not gambling. Although mobile sports betting operators will have to ensure “there’s no intermittent routing through other states.”
In any of these cases, the process could take “a number of years” before being resolved, said Mark Hichar, a Boston- based gaming lawyer at Green- berg Traurig.
“If there were an injunction issued by a judge that had nationwide effect, that would put a stay on enforcing the new interpretation, and take the pressure off.“
It could then take months before being resolved even by the first court followed by, potentially many years of appeals.
“In the meantime, there could be a new federal law, and if there is a new administration in two years time, there could be still a further interpretation of the Wire Act.”