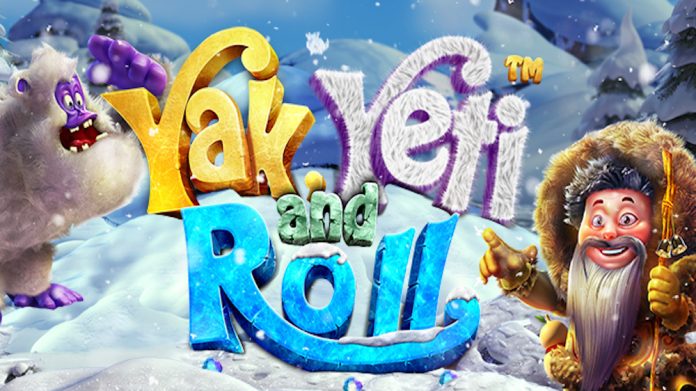 Take to the tundra with two unusual companions in Yak, Yeti and Roll. The seasonal, cascading slot game from Betsoft Gaming.

Set in the Arctic circle, Yak, Yeti and Roll invites players to join an Inuit inventor, known for his wild creations. Together with his long-suffering Yeti sidekick, they set out to traverse the wintry wastes in a very unusual vehicle. Foregoing traditional reindeer-pulled sleighs, our Eskimo Yak has built an ornate sled to steer through the snow. With a massive spiked wheel in front, his Yeti pal propels them forward by sheer pedal power.

Built around Betsoft’s proprietary TRAIL SYSTEM, Yak, Yeti and Roll was designed to create a sustainably compelling player journey. As our party crosses the ice fields, a constant trail of green, yellow, and white gems move across the bottom of the screen, advancing with each cascade of symbols that enter the reels. As the spiked wheel of the sled rolls over a gem, it is crushed into the snow and the player earns a prize from a pool containing instant cash, cumulative cascade multipliers, and free spins – with a maximum win of 200X their total bet.

Released right at the beginning of the holidays, Yak, Yeti and Roll is packed with seasonal spirit. A whimsical soundtrack follows the unlikely duo across the icy wastes, joined by festival symbols like warm mittens, a ribbon-bedecked reindeer, an inviting igloo, and a pack of snow-speckled huskies.

The wins really start to snowball in Yak, Yeti and Roll’s free spins feature. Players can build up big reserves of free spins on the trail, add free-spin-specific multipliers, then also apply cascade multipliers to quickly turn a small payout into an earth-shaking avalanche. As with all new Betsoft games, Yak, Yeti and Roll offers players freedom of choice with a feature-buy-in mechanic, allowing them to trigger free spins – otherwise only available from the trail – and improve their win potential on demand.

“Yak, Yeti and Roll is releasing at an exciting time,” says Annamaria Anastasi, Marketing Director for Betsoft. “Not tied to any particular celebration, the game is designed to evoke feelings of warmth in winter, which are common across the entire holiday season. We built that atmosphere with larger-than-life characters, jolly artwork, a wonderful soundtrack, and a clear paytable – creating a game with the broadest possible appeal for winter 2018/19 and beyond. At the same time, Yak, Yeti and Roll comes at a vital juncture for Betsoft, incorporating our full range of newly-developed proprietary technologies. We have also just released our genre-redefining Max Quest title, and Yak, Yeti and Roll demonstrates that, as well as introducing all-new experiences, we also lead the industry in character-driven traditional slots.”

Like recent Betsoft games, Yak, Yeti and Roll was built in the company’s cross-platform SHIFT development environment, which guarantees that the same great gameplay reaches players on whatever device they choose.

Listen for the jingle of sleigh bells, the thump of Yeti feet in the snow, and the satisfying crunch of prize-laden gems when Yak, Yeti and Roll reaches players this winter.