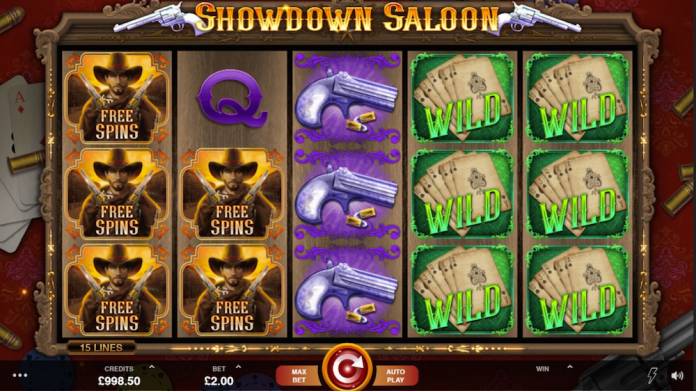 Microgaming provides its own take on the wild west in Showdown Saloon, developed by Fortune Factory Studios exclusively for Microgaming.

Set in the dust and dirt of the frontier, the wildest slot in the old west pulls players through the saloon doors into a world immersed in fast-paced western action.

Showdown Saloon is a five-reel, 15 payline western-themed slot loaded with thrilling features, including pattern-based Mystery Stacks, Re-spins and Free Spins. Illustrated with vibrant graphics, the game features richly depicted saloon accessories, such as pistols, playing cards, rolling dice and poker chips, which act as symbols in the game and deftly capture the essence of the wild west theme. Absorbed with a catchy and funky soundtrack, along with distinctive sound effects such as train whistles and ricocheting bullets, the music builds suspense and intensity, enhancing the player’s gameplay as they take aim for big rewards.

Large Mystery Stacks are loaded on every reel. Each reel’s Mystery Stack is replaced by a single symbol, with a maximum of three different symbols substituting across all five reels. Stacks on reels one and two will always get the same matching symbol. The Re-Spin feature is triggered when the full symbol stacks of the same symbol land on reels one and two. The feature chase comes in when the activated stacks are locked and the remaining reels respin. Mystery Stacks within the remaining reels always match the symbol in the locked reels, increasing the chances of connecting line wins or retriggering respins. Players will be aiming for a full reel blackout of a single symbol.

Showdown Saloon includes an exciting bonus feature in Free Spins with Re-spins. Players can trigger 5, 10 or 15 free spins and the intensity builds with guns blazing and poker chips flying far and wide, amplifying the slot’s classic western theme. In free spins, Mystery Stacks always match across all reels. Once the reel deck is filled with matching symbols, players can set their sights on some high stakes wins up to 1500x their bet.

Players can step up to the bar for high-stakes wild west action in Showdown Saloon, which is available exclusively for Microgaming operators from Tuesday 4 December. Watch the fastest gunslinger from the old west in action here.

David Reynolds, Games Publisher at Microgaming, comments: “Showdown Saloon is a fast-paced, thrilling and rewarding experience for all kinds of players. The soundtrack is orchestrated with high production and fits perfectly with the theme – you can’t help but tap your feet and get into the wild west zone as respins set the scene for exciting rewards. Showdown Saloon is the second game under the Fortune Factory Studios brand, and there are plenty more exclusive titles coming from this talented collective. Players will experience high volatility gameplay within this title as they aim to hit that full reel blackout.”

Phelan Sykes, Head of Game Production at Fortune Factory Studios, adds: “Enriched with exciting graphics and sounds, Showdown Saloon gives you the feeling of mingling with card sharks and gunslingers in a classic wild west saloon. Optimised for desktop and mobile, the game allows players to set their sights on high stakes wins. We are confident players will enjoy the game as much as we do and look forward to releasing more games for Microgaming in the future.”