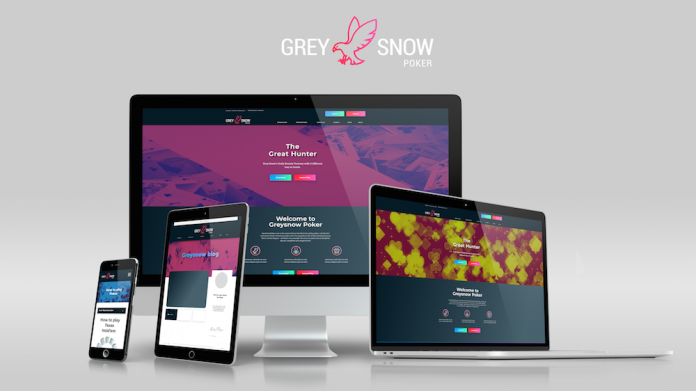 If the poker sector is going to thrive into the future, it’s vital to create a fun, fair and transparent environment in which even the least-experienced newcomers can flourish. That’s the idea behind GreySnowPoker, a newly launched, Isle of Man-licensed poker site that hopes to become a game-changer in the sector.

As every player knows, poker can be a cut-throat game – but it doesn’t always have to be. That’s the opinion of the industry veterans behind a new poker site that aims to open up the game to a wider pool of casual players and newcomers, while also appealing to the professionals.

Launched this month, GreySnowPoker was founded by the Iowa Tribe of Oklahoma, whose name in their native tongue is Bah Koh-Je, meaning “people of the grey snow”.

With its focus on opening up the game to a fresh generation of players, GSP feels like a brand that’s of the moment. Leaving behind an increasingly predatory online environment plagued by third-party software and quick-hit casino-style games, its founders are keen to nurture the poker stars of tomorrow through a new model they call FairPlay.

According to George McIntosh, GSP’s managing director, FairPlay is all about allowing the poker dream to thrive, enabling players to start small and work their way up. Developed by their team in conjunction with software supplier RedLark, the model was intended to create a more open and satisfying poker experience for players of all levels.

“One thing we noticed was that, in recent years, novices or recreational players were being targeted by more predatory players who were only after their cash, with little or no consideration about the actual thrill of playing poker,” McIntosh said. “For a newbie to get fleeced in a matter of minutes leads to a poor experience, and one which is likely to put them off playing poker again. It became obvious that this wasn’t ideal if we want poker to evolve and grow.”

Discussing the decision to work with software developers RedLark, he added: “Teaming up with RedLark was a great move, as we both have a similar attitude and vision when it comes to traditional online poker and its future. When they realized we wanted to make a difference in the poker community, they couldn’t have been more enthusiastic. We sat down with them and we carved out what is now the FairPlay model. It was their vision as much as ours, and we were lucky enough to find a software provider who couldn’t have been more aligned to our brand values of integrity, innovation, fairness and fun.”

The FairPlay model begins before the player has even sat down at the table. While in the lobby, they can choose to study the game-play in an ongoing cash game, but they aren’t able to see the identities of any of the players until joining the table. After picking a table, they are seated randomly, at which point they discover the identities of their opponents.

Even more radically, GSP have chosen to dispense with rake during the game itself. Ditching the complicated mathematics and rake pay-outs from the pot, they have developed a much simpler system whereby players at a table pay a small percentage of whatever they leave the table with.

With their focus on safeguarding fair, simple rules, the team behind GSP believe they have hit upon a formula that can keep both sharks and fish engaged in the game in the long term. With a more transparent and affordable fee, says McIntosh, this will also open up avenues for sharks to take on sharks, giving experienced players the chance to fully test their skills against better opponents.

“We have already seen that our FairPlay service fee creates longer sessions, encourages more heads up play scenarios, and generally creates a willingness in all players to come back and play more,” he explained. “The added pool of players and the longer sessions are as good for experts as they are for recreational players.

“In a nutshell, we’re trying to prevent unethical play. We all want poker to grow – and we want to be the next generation of poker – but we need the new players to become fans and to learn the skills. GSP hopes to attract and nurture players in order to create champions, and nobody would deny that this is a good thing – poker needs to be creating its very own Serena and LeBron, not stifling them.

“Nurturing is key: poker needs to be more user friendly, to be open and transparent and honest, which means cutting out the bad and replacing with the good, but that doesn’t mean alienating our experts, our great poker community and our fantastic ambassadors that we already have out there. Expert or beginner, as long as you love poker and you love the thrill of the game, GSP will be there to encourage you.”

Following the soft launch of GreySnowPoker.com this November, McIntosh and his team will be working hard over the coming months to grow their audience and develop their brand in their core markets across Canada, Europe, Russia and Latin America, as well as developing their mobile product for emerging markets such as Africa. Competing against poker’s biggest names is bound to be a tough task, but with the clout of the Iowa Tribe of Oklahoma and one of the world’s most respected gaming licences behind them, they feel prepared for the challenge.

“Holding an Isle of Man licence will definitely help us to grow,” McIntosh said. “It is the most respected licence that a gaming site can hold. It adds gravitas to our existence and it illustrates our high standards when it comes to the safety and security of our players. It was the only licence that was considered if we were to be taken seriously by the poker community. Of course, as we grow we will be applying for other licences along the way.”

With such a distinctive brand philosophy, McIntosh hopes that hype about their unique offering will spread organically, with the potential poker stars of tomorrow drawn to the inclusive atmosphere and ultra-modern, responsive technology.

“Word of mouth is huge in the poker world,” he said. “The whispers will get louder, I’m sure of it. We will engage with our players via social media, we’ll ask players what they want to see and then we’ll do it.

“You just have to look at the site – it’s fabulous. It’s full of colour and life, and we have the FairPlay model and philosophy behind us. Our customer service is fantastic, and the software is even better. For our players, we already have a huge first deposit bonus, our great cashback program, awesome guaranteed tournaments and a whole host of freerolls. What’s not to like?

“Other operators in the past have tried to address inequality in the poker ecosystem and some of the specific features we are introducing have been done before. But the difference is that our solution is a holistic solution. It is the combination of the FairPlay Lobby, the FairPlay Service Fee, and the FairPlay Loyalty Program that create better play experiences for players of all levels of experience and skill.

“We also have the unique advantage of launching in 2018 – and it shows. Having such a close relationship with our software provider means we will always be innovating. GSP was designed with HTML5 in mind, so it’s responsive across all platforms. We don’t look like any other poker site. The best that other sites can do is in revamping their pages and tweaking their software. They aren’t in a position to be game changers anymore; we are.”