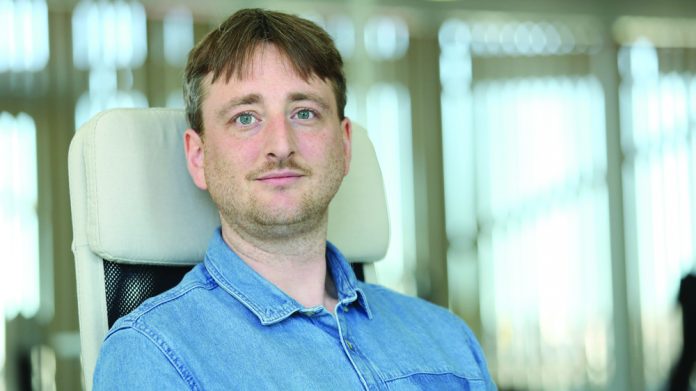 When a mutual friend suggested I should “come and meet Lars, you’ll be glad you did”, I must confess my mind wandered. Lars Ulrich, drummer of Metallica? Lars Lagerback, manager of the Iceland football team that dumped England out of Euro 2016? As a fan of neither, I was delighted to learn that the ‘Lars’ I was to meet is Norwegian entrepreneur Lars Lien, former PokerStars executive and co-founder and CEO of esports betting platform, Luckbox. The venue was a Soho boozer, the sustenance was Guinness and Camels and the conversation did indeed make me glad I gave up my Sunday. Nick Hardy reports.

Awareness of esports, for those over a certain age, is not the same as understanding. We hear it’s huge and we hear the opportunities are exciting but at the moment, for those from a traditional background, that’s pretty much as far as it goes. So let’s begin with Lars filling in some gaps.

What is esports and is it really as big as people say?

Lars Lien: “Esports is the playing of video games at a competitive level. Professional teams and players compete in major events in front of thousands of fans, as well as millions of online viewers. To put this into context, 31 million viewers watched the 2016 NBA Finals while 36 million watched the League of Legends World Finals in the same year. Many games have an esports infrastructure but the so-called ‘Big 3’ are Dota 2, CS:GO (Counter Strike:Global Offensive) and League of Legends. Brands such as FIFA and Fortnite are also making strides in the sector. In short, esports is huge and its rate of growth astonishing. Data insight specialists Newzoo values the global esports market at over $1bn with an audience approaching 400m.”

So how did the Luckbox journey begin?

LL: “I’ve been an obsessive gamer since I was a kid growing up in the ‘Viking Capital’ of Norway, Sandefjord. My game was StarCraft and I competed in events across Europe, hoping to become a professional player. That wasn’t to be, but I did end up with a career in gaming. I worked at Sony Online, then PokerStars in London, where I met their Poker & Gaming Integrity Manager, Mike Stevens. I then moved to Malta to become COO at GosuGamers, a leading esports news site. Once in Malta, I again hooked up with Mike who had relocated to the island and was playing poker professionally. He had begun developing a gam- bling platform and was new to esports. The decision to combine our expertise and focus on the embryonic area of esports betting was an obvious and logical one to make. Mike and I also spent a lot of time looking at cryptocurrencies, researching and trading, and with the emergence of ICOs (Initial Coin Offerings) as a serious way of raising funds, the stars aligned. We had a Business Plan and we took this to our contacts in the crypto world and attracted fantastic support for our esports betting proposition.”

If esports is so big, why aren’t other more main- stream betting operators involved?

LL: “Well, some are, but the concept is outside their normal comfort zone and very few approach it in the right way in terms of benefitting either players or themselves. They may have a token esports offering but they are yet to invest in understanding its depths and nuances. Most have simply bolted esports onto their existing menu. They don’t see that while football will always be globally strong, it is becoming clear that the coming years will see esports audience numbers far outstrip the likes of rugby, cricket and others. And the esports bettor expects a different user experience – one that is more familiar to a ‘gamer’ – and this is what we have built at Luckbox. Beyond the big-hitters, there are esports-dedicated operators in the market, but most don’t have the regulatory framework required to offer players the necessary standards of safety and security. Luckbox merges the best of both worlds, an authentic esports-centric product that is built on the foundations and practices of a traditional bookmaker.”

How has this ‘USP’ been achieved?

LL: “Firstly, Real Time Games Holdings, our company behind Luckbox, is the first cryptocurrency supported esports betting platform to hold a full licence issued by the Isle of Man Gaming Supervision Commission under the Online Gambling Regulation Act (OGRA). Secondly, our team is unique. We have an unbelievable mix of talent with deep knowledge and pas- sion for esports and vast experience within igaming and betting. I never cease to be amazed by the calibre of people we attract, individuals with the pick of employers across the industry. Within such a competitive environment, they clearly have the vision to embrace the full potential of what we are striving to achieve. Our Chief Marketing Officer, Vadim Soloveychick, was previously Marketing Director at PokerStars. Our Chief Financial Officer, Archie Watts, was Head of egaming at KPMG. Our Chief Operating Officer, Quentin Martin, was Head of Social Poker at PokerStars. And our Ambassador, Paul ‘Redeye’ Chaloner, is one of the world’s leading esports broadcast hosts and commentators.”

Momentum is clearly gathering pace, so what challenges do you now face?

LL: “Starting with nothing always presents challenges! One of our greatest hurdles has always been explaining our story, our purpose, our aims. The notion of mixing gambling and cryptocurrency can be difficult to grasp, so everything we do is built around integrity. We are totally open with every- body and this has paid off by building us a solid reputation. Those who supported our initial ICO have literally made it possible to come this far and I look forward to their trust and patience being rewarded. Working with the Gambling Supervision Commission on the incorporation of cryptocurrency into our offering has required incredible vision on their part and this ground-breaking relationship is special to us.”

And so, what’s next?

LL: “Preparation for our launch has been an immense task. With a successful crowd sale completed, we’ve rolled out a number of features, such as our esports content hub. We’ve also made key announcements, such as the OGRA licence and the partnership with platform provider Omega Systems, and more are to follow. Our go-to-market strategy is in place. We are well funded to deliver the product and are now seeking further strategic partners to maximise this momentum and accelerate upscaling.”

Listening to Lars Lien, it is not difficult to embrace the opportunity. The tens of millions of esports players and fans require a betting product they can call their own and the potential for engagement is immense. There is also a huge cryptocurrency community requiring a product tailored for their use. Convenience is important for betting in all sectors and the case for crypto in terms of simplicity of global transaction is a strong one. Frictionless payment systems are a goal across all markets, especially those where payment methods are a concern. The entire sports betting industry exists as a service to its audience and so should follow audience trends. Esports is a global phenomenon, faster growing than any other competitive pursuit and delivering a credible esports betting product is the logical next step. The non-drummer of Metallica with a taste for the black stuff is waiting to help the industry put its best foot forward..”