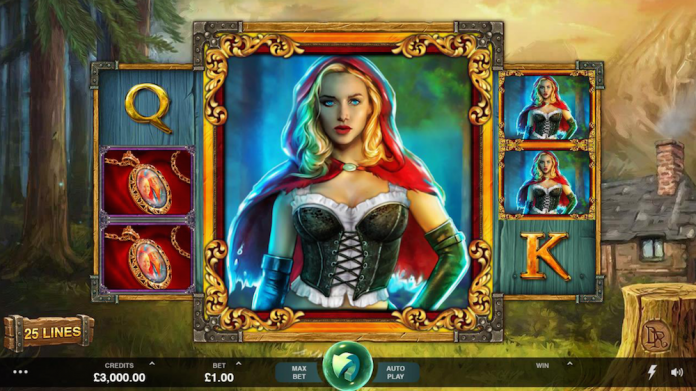 From the game studio behind Microgaming’s Playboy Gold and Halloween online slots, comes another stunning creation by Triple Edge Studios, this time reimagining a classic tale with a wicked new twist.

Microgaming’s Wicked Tales: Dark Red is a five reel, 25 payline slot set in the foreboding forests of Ravenmire, where fortune and fantasy collide. The game features Triple Edge’s signature Wandering Reels, a group of three reels that spin together and contain Jumbo Blocks, which work to increase the player’s chance of landing big wins.

Landing three bonus symbols in the base game triggers the Wolf’s Wheel Bonus, where the suspense intensifies. During the bonus, players have the chance to spin the wheel for cash prizes, multipliers and the treasure chest, a symbol that leads to the Forest of Fortunes where the game’s pick bonus awaits.

Within the Forest of Fortunes, players can choose from a number of leather pouches to find cash prizes, which combine with a multiplier that increases each time a pouch with a cash prize is revealed. Immunities in the form of an axe can also be collected, helping players prolong the bonus round by defending against the lurking werewolf attempting to bring an end to the feature.

Landing on any high symbols during the wheel bonus activates the free spins round, where nine free spins are awarded. The round features Wandering Reels and takes place in a deserted cabin, providing players a sanctuary from the stalking werewolf as they spin their way to big rewards.

Breathtaking wins and magical encounters await in Wicked Tales: Dark Red, which is live on all platforms from Wednesday 26 September 2018. Watch the gameplay video here.

David Reynolds, Games Publisher at Microgaming, comments: “Wicked Tales: Dark Red brings back the exhilarating Wandering Reels feature alongside a gripping feature guaranteed bonus wheel, which can lead to a pick bonus round or free spins round. Triple Edge Studios have done an amazing job in combining darker elements with exciting features and new math design to inject newfound thrill and suspense into a classic tale.”