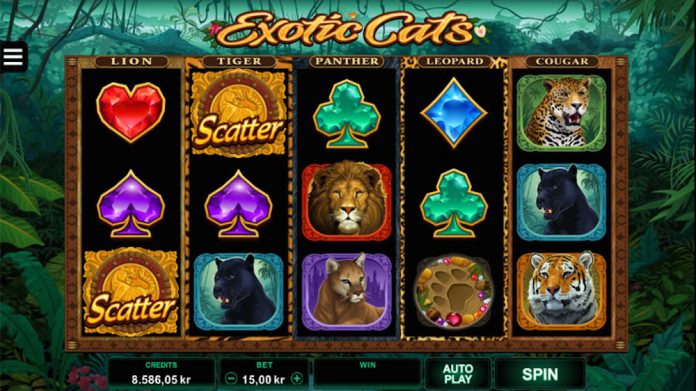 Microgaming has released its latest slots title Exotic Cats, asking players to navigate the deepest jungle in order to locate promised treasure guarded by the world’s most infamous big cats.

The five by three reel, 243 ways online slot features vertical wilds, alongside lions, tigers, panthers, leopards and cougars as guardians of reels, as well as the title’s operative symbols.

“The vertical wilds feature gives players the opportunity to earn some spectacular prizes in the exotic cats’ den, where up to five reels can be turned entirely wild by the powerful felines with a single swipe,” said David Reynolds, games publisher at Microgaming.

“With a friendly minimum bet of 0.15 and wins up to 106,000, Exotic Cats is the perfect game for first time adventurers as well as more experienced players looking for wild wins.”

Each of the vertical wilds in the base game, as well as the title’s free spins can be activated by players matching corresponding big cat symbols to the appropriate reel.
The bonus features will activate if the player lands the lion symbol on the first reel, the tiger on the second, the panther on the third, the leopard on the fourth and the cougar on the fifth reel.

When the big cat symbol lands on its associated reel, the big cat guarding it will come to life, turning the entire reel wild to create combinations that can deliver players greater wins.

Free spins are unlocked by landing three, four or five scatter symbols in the base game, while acquiring three or more scatter symbols during the bonus game will trigger five additional free spins.

The title is currently live across all Microgaming’s platforms.