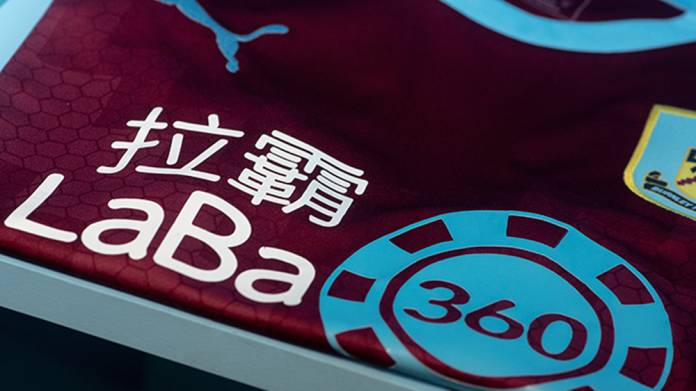 New international gaming and betting operator, Laba360, has announced that it will be Burnley Football Club’s new shirt sponsor and principal partner from the start of the 2018-19 Premier League season.

The multi-season partnership will see the firm’s logo feature across the club’s home and away shirts in all competitions; Laba360 will also feature in pitch side and generic branding at Turf Moor, as well as across online and social media platforms in the UK and internationally.

Laba360 is joining the Clarets at a hugely exciting time, as the club embarks on its first competitive European adventure for over 50 years, following its eye-catching seventh-place finish in the Premier League.

Burnley Football Club is a genuine success story when it comes to top flight football in England and the operator is delighted to be its new shirt sponsor and principal partner. Its recent sporting achievements are the result of hard work and attention to detail, allied to strong ties to its local community, values that the company strongly identifies with.

Angelika Tang, Director of LaBa360, said: “This is a hugely exciting time to partner with a high profile Premier League team like Burnley. Built on solid foundations and following a stellar season, we are certain the club will provide us with the platform to launch this new, international igaming brand. We look forward to engaging with the club’s ever-growing fan base in the UK and worldwide.”

The new partnership will enable Burnley Football Club to engage with a wider audience and expand a growing international fan base, while giving Laba360 exposure in the most watched football league in the world.

Anthony Fairclough, Commercial Director at Burnley Football Club, added: “We are proud and delighted to welcome Laba360 on board. This is the largest financial deal in our history, and the third international company we have had as principal partner, which demonstrates the growing global appeal the club offers companies overseas thanks to our Premier League platform. We look forward to a very profitable relationship in the coming seasons.”