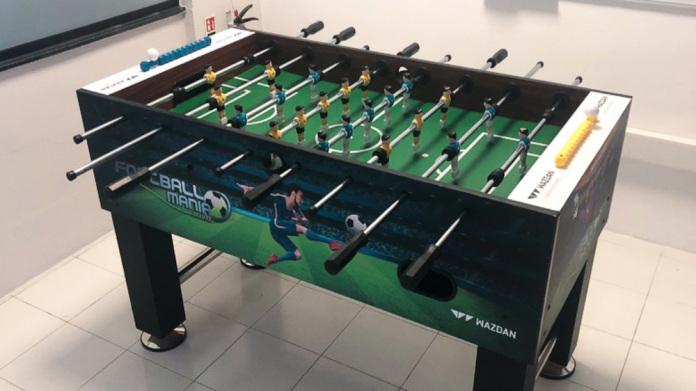 The table football games come complete with personalised shirts on the players and a World Cup table football competition has been planned at the firm’s new European office.

This high stakes game can be enjoyed for its superb graphics and animations, as well as an ambient sound atmosphere that brings the major stadium onto the screen and pulls players into the game to kick off the ball and run towards scoring the jackpot. Set in a major football stadium, the reels are set on the grass against a cheering crowd. To win, players initially find several identical symbols anywhere on the screen, while the game allows them to block any symbols and spin the reels again for a chance to score even bigger wins. Common elements of the paytable are the shoes, whistle, fan’s hat and referee. The goalkeeper and the bronze, silver and gold cups are rarer but also much more rewarding.

All of this is underpinned and driven by a team of more than 100 professionals, developers, graphic designers, animators, mathematicians, sound designers, game developers, administrators, marketing specialists, implementers and customer service specialists across 4 countries and coordinated from a new European headquarters in Malta that extends over 4 floors on the edge of the countries’ exclusive Central Business District.

Head of Sales at Wazdan Andrzej Hyla said: “This is a game for football fans and they’re people with a lot of passion. Ahead of a packed World Cup game calendar we’re delighted to be bringing a great new slot to the fans with so many special features to keep players coming back. Football Mania Deluxe is an engaging and fulfilling experience for anyone curious looking to try something really new.

”  Releasing at least two new games per month over the last year, Wazdan’s HTML5 portfolio of award-winning games is now with a growing number of leading online casino brands, including EveryMatrix, Videoslots, Solid Gaming and iSoftBet amongst others. All the company’s games contain the Unique Wazdan Features, that include the world’s first Volatility Levels, Energy Saving Mode, Double Screen Mode and Unique Gamble Feature.