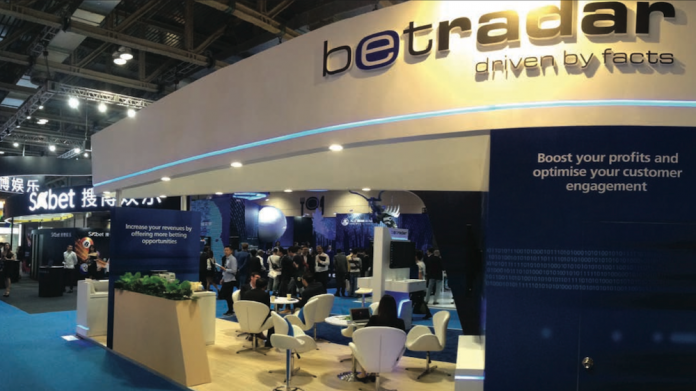 “We cannot not be here,” explains Sportradar’s Lorenzo Caci, director of business development and strategic partnerships.

“We’re a very important player in every market. So we have to be represented, even if the markets in this region are not regulated yet. For us this is standard.”

Every year, for some six years prior to the Supreme Court’s inaugural decision to repeal the US betting ban, Sportradar have taken a stand at G2E Vegas. Even Caci concedes that in the early days he’d find himself questioning whether it worth spending the time and money pitching to a market that did not yet exist.

“There were no customers for us. But we kept telling people anyway: If you could offer sports betting, this is what we could do for you.”

Of course, with 20 states now lining up to launch betting markets in America “we’ll more than recover our investments.”

In the same vein, Sportradar’s presence at G2E Asia 2018 is more than speculative, and its stand having nearly doubled in size from last year is perhaps indicative of the mounting optimism.

“We know this is a grey market, but it’s also a huge market. And as we see more and more signs of regulation, we’re becoming more proactive,” says Caci.

“We’re here so we can better understand the markets, to show our product to gaming regulators and licensed lottery operators, and also to show we are willing to invest once more jurisdictions open.”

Betradars Asian clients already include big monopoly players: the Hong Kong Jockey Club, Singapore Pools and SJM’s Macau Slots (the only sports betting operator in Macau). But part of its role in Asia is to continue making the case for regulation, and more open licensing regimes.

While many states have been reluctant, seeing it easier to let things lie, several countries are “starting to realise that not regulating brings its own problems,” he adds. “Whereas regulating brings tax opportunities, and also clarity for international investors looking at the country.”

Just as Sportradar did for the US, and continues to do in Europe and other mar- kets around the world, “we always actively support these developments, through our 360 degree approach of sports data, risk management and look- ing after the integrity of sports”.

“Obviously sports integrity is a part of our business, and it’s extremely important to look after.”

The positive decision by the US Supreme Court can only be a boost to the regulation in Asia, Caci considers.

“Whatever the US is doing has an impact,” he reminds. But more than that, it’s providing a good example for other states to follow. Asides from the obvious tax collections, different stakeholders are being included: from the integrity funding for leagues to the development of youth sports. India too, he says, is becoming a beacon in Asia for how to introduce betting regulation in a diligent, sustainable and socially inclusive manner. Vietnam and Cambodia are now poised to follow suit.

“There is clearly a positive trend in Asia. But still, many states simply deny gaming, as if it doesn’t exist,” Caci adds. “But of course it does exist, and there’s so much potential to make something out of it, and control it.