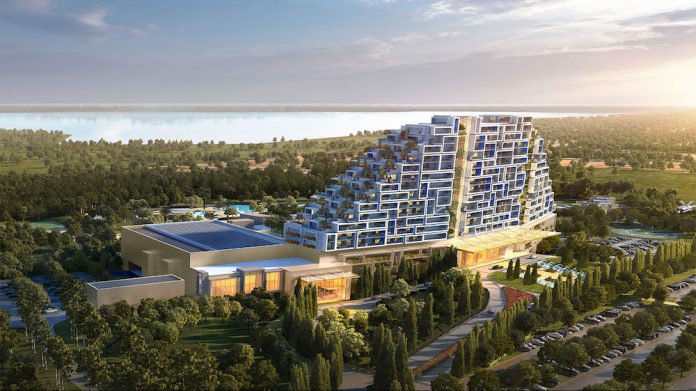 Melco International Development stated that the temporary casino will begin operations in June during the groundbreaking ceremony for City of Dreams Mediterranean.

At the groundbreaking ceremony for City of Dreams Mediterranean, Melco International Development confirmed that its temporary casino will open on 28 June.

“Today, we are not just laying the foundation stone of the integrated casino resort but also entering a new era for Limassol and for Cyprus as a whole,” said the company’s chairman and CEO, Lawrence Ho Yau-lung, speaking at the event. “Our project will contribute significantly to the country’s efforts for sustainable economic growth and an increase in employment rates.”

The €12m temporary facility is currently under construction on a small parcel of land not far from City of Dreams Mediterranean.

The property, named Cyprus Casino or C2, will feature 33 gaming tables, 242 electronic gaming machines, and a VIP gaming area, along with a restaurant and two bars.

Later this year, the company will launch two satellite casinos in Nicosia and Paphos in November, with two further venues set to commence operations in January and May 2019 situated in Larnaca and Ayia Napa.
City of Dreams Mediterranean is scheduled to open its doors in 2021 at which time the temporary casino will be closed and personnel will be transferred to the new resort.

The integrated resort property will offer 36 gaming tables and 1,200 electronic gaming machines once complete, along with a 500-room five-star hotel, 11 restaurants, 1,200sqm of retail area, and almost 10,000sqm of meeting and exhibition space.

Speaking at the groundbreaking ceremony, Cyprus’ president, Nicos Anastasiades, affirmed the €550m development is the biggest investment project ever undertaken in Cyprus.

“Our country is much more than just an attractive ‘sun and sea’ tourist destination,” Anastasiades stated. “Cyprus has all the prerequisites to be established as a regional and, why not, global premium destination, a genuine point of reference for luxury tourism and responsible gaming.”

He said that once operational, the resort will create around 6,500 jobs and attract an additional 300,000 visitors to Cyprus each year, helping offset seasonal tourism.

The casino resort will contribute €700m or four percent of the country’s GDP to the economy from its second year of operations, the president told attendees at the event.

“Foreign direct investment constitutes a fundamental pillar towards sustainable economic growth and prosperity. In this respect, …we are witnessing the realisation of a project with extraordinary benefits for our economy, with positive impact on the country’s GDP and in tackling unemployment,” Anastasiades added.

The president of City of Dreams, Craig Ballantyne said that Melco anticipated visitors from the UK, Germany, Russia and Israel, all of which already established tourism markets for Cyprus.