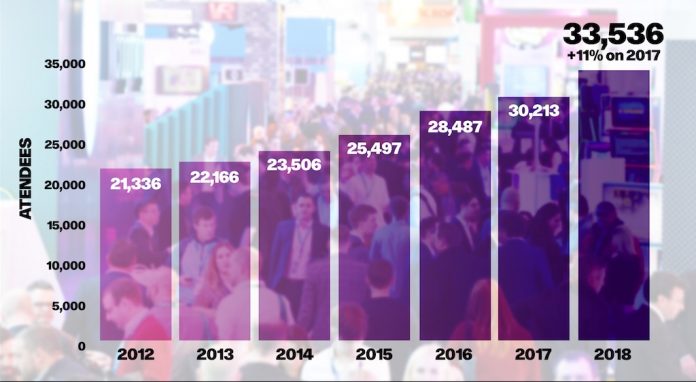 The 2018 edition of ICE London has been officially declared the biggest on record. Following an independent audit of the world’s biggest gaming event, the unique number of visitors attending ICE London has been confirmed at 33,536, an 11 percent increase on the 2017 figure and a landmark figure which constituted the seventh consecutive year of growth for the industry leading gaming technology event. Despite occupying an additional hall at London’s ExCeL, density also increased year-on-year, with  the average number of visitors per stand up 17 percent and the number of visitors per square metre up 12 percent. In a year that the ICE brand demonstrated its unique ability to engage with gaming professionals based throughout the world, the number of represented countries edged higher from 151 (2017) to 153 with the exhibition experiencing a surge of visitors from key growth regions, notably North America (+33 percent), Africa (+23 percent) and South East Asia (+18 percent).

Reflecting on the positive data, Kate Chambers, Managing Director of Clarion Gaming, said: “Achieving a double digit uplift in attendance and extending the sequence of growth to seven consecutive years is a massive achievement for everyone involved in ICE London. This is a fantastic collaboration involving the great team at Clarion Gaming, the gaming community at large who travelled to London from a record 153 sovereign states and jurisdictions, as well as the community of international exhibitors who support the ICE brand with such passion and creativity. The backing we receive from exhibitors is evident in the post-show research we commission each year and which measures the satisfaction rating as a Net Promoter Score (NPS). The exhibitor NPS came in at +51.8, which places ICE London among an elite group of business events staged in the UK, an accolade I am extremely proud of.”

She added: “One of the stand-out features of ICE London is the breadth of the gaming offering that’s available for visitors to experience. Whereas more regional centric exhibitions have a narrower focus, ICE London embraces all forms of gaming, a feature which is reflected in the audience profile. This year, the number of visitors interested in bingo, street, poker and social gaming more than doubled. Half of the audience had an interest in sports betting and two thirds in the casino business. Of the newer gaming sectors, 20 percent of the ICE London attendance had an interest in eSports. It’s this mix of verticals that delivers the dynamic that keeps the ICE London experience fresh and relevant to all sectors of the industry.”

ICE London 2018 featured a total of 589 exhibitors from 65 nations occupying 43,500sqm of net space and 36 of the 44 halls at ExCeL London. ICE London featured an extensive learning programme of pay-to-attend and free content courtesy of the ICE VOX conference programme and ICE seminars. New features for 2018 included the ICE Payment Solutions Section, comprising 4,000sqm of space, and the Consumer Protection Zone, which featured the latest social responsibility initiatives that are being deployed to combat problem gambling.

The 2019 edition of ICE London is being held across 5 – 7 February, ExCeL London.  For more information, visit: www.icelondon.uk.com