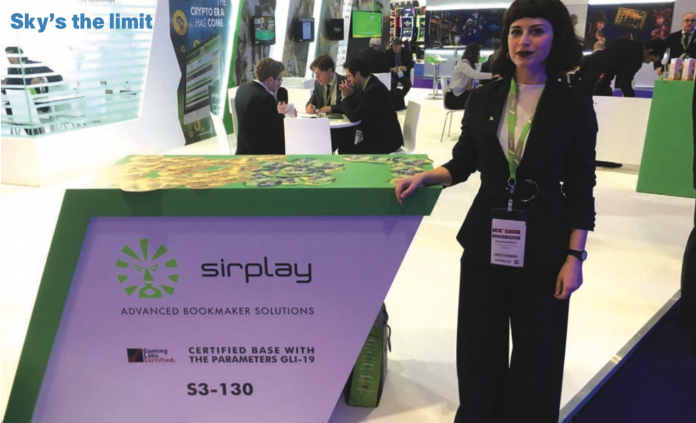 iGaming Times caught up with Sirplay’s Roberta Belfiore on the show floor of ICE who explains how a recent deal with Google Cloud could revolutionise sports betting in the land of samba.

iGAMING TIMES: What have been the priorities over the last year and what’s your message for the show?

ROBERTA BELFIORE: The priority, of course, has been the release of the new live betting game module. It’s absolutely a revolution, because it’s based on the Google infrastructure: Google Cloud. And that’s an amazing thing, because everybody has problems with servers and capacity for their players.

Maybe you have a beautiful platform, but your players may have problems, maybe they don’t have the chance to bet, or there’s a problem with the website. With this new live betting product, it’s so fast.

In fact it will be the fastest live betting on the market with 40,000 transactions per second. So we really are taking care of this part of the partnership with Google and just to keep going with the work we are doing on the new platform.

iGT: You’re also showcasing your cryptocurrency sportsbook to the show. There’s been so much hype around digital currencies this year, but not that much for real-world use – what value do they bring to betting?

RB: What can be the future? The Pros? Well, of course, Bitcoin is a pro because it’s a digital currency, its global, its faster. You don’t have to rely on a bank, so there are fewer problems around fees, and the fees are of course lower. And there are a lot of people who are now interested in investing in Bitcoin – it’s a trend nowadays.

This is important because there are people who want to bet with Bitcoins, and so it’s like a new segment of the market, where you have the possibility of attracting new players you otherwise wouldn’t catch.

Also, there’s just the one currency, so you don’t have to worry about transferring into dollars or euros – just whatever currency you want.

iGT: And are there any negatives?

RB: No, not really, it’s not regulated in all parts of the world, so there is less regulation in some areas. But that is changing. For example Malta is moving forward towards using Bitcoin and Curacao, too. So, little by little, people are coming around and legislation is changing.

iGT: How easy is it for players to buy in and start if they don’t have their own cryptocurrencies?

RB: It’s really easy, you just need an online wallet, and your address. It probably takes about five minutes. It’s easy, it’s private, and it’s digital, so everything is just a few seconds away. Bitcoin is a bit like Paypal was a few years ago: People found online payments a bit different, but they’re getting used to it now. And think it’s going to be the same with Cryptocurrencies – it’s not the future, it’s the today.

iGT: Regarding these innovations – are they particularly applicable to your target markets Latin America and Africa? Why so?

RB: They’re working, in Africa, not so much in Latin America just yet. But they are also uncertain about legislation, so it’s not about the region, more about each particular country. A lot of people are interested though, and we already have one Bitcoin platform in Africa and I think that there is interest in developing things there.

iGT: In Brazil, specifically, how significant would regulation be to Sirplay, and what will be the main features of the market?

RB: Well, it would be a huge sports fan base, so a lot of people are interested, and we are very interested. We really want to stay close to the country. Because there is such a big catchment, it would be a real step forward in the Latin American market.

Sports, of course, will be the main feature, and also live betting. Live betting is really interesting for young people, as it’s instant gratification. So many fans watch the match, and you can bet before and during, so it’s like you’re playing the game too – it’s really engaging.

Right now there is a lack of live betting only a few events have it. If they crash you can’t bet, but with this new model we’re launching with the regulation plan, it would be a really big change in the market.