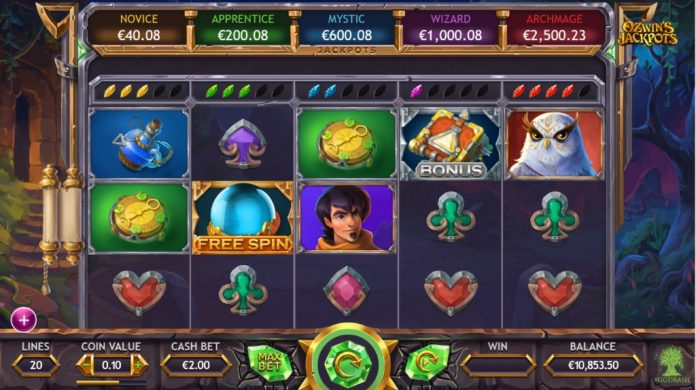 The five-reel, 20-payline slot sees Ozwin’s trusty apprentice weave spells in an attempt to bring back the mighty magician to his human shape, all in exchange for frequent big wins.

The game sees players collect crystals and orbs of power to restore Ozwin, alongside taking a shot at five different jackpots. The latest release also features the Spellbook bonus game, with extra crystals and prizes on offer.

The high-volatility title will see jackpots fall regularly, and more often than other multi-jackpot games, ensuring players remain engaged not just by the visuals and audio of the game, but also by the chance to win big.

“Ozwin’s Jackpots is all about jackpots,” said Jonas Strandman, head of slots at Yggdrasil Gaming. “Yes, the game has an engaging concept, fun gameplay and sound mechanics, but its real attraction lies in the fact that it’s designed to pay out jackpots more often than other multi-jackpot games, with the smaller ones dropping many times a day.”

Launched on Yggdrasil’s established HTML client framework iSense 2.0+, gameplay in Ozwin’s Jackpots will be backed by the company’s in-game promotion tool Boost, alongside its Missions function, which are both proven to boost retention rates for operators.

Meanwhile, Yggdrasil’s Brag tool allows customers to watch replays of winning spins and share them with friends and fans on social channels.

In line with all Yggdrasil slots, Ozwin’s Jackpots is built using responsive design, to ensure that players experience the same game quality on both mobile and desktop.

“We are quietly confident that the constant jackpot drops will make Ozwin’s Jackpots a fan favourite for years to come,” added Strandman.