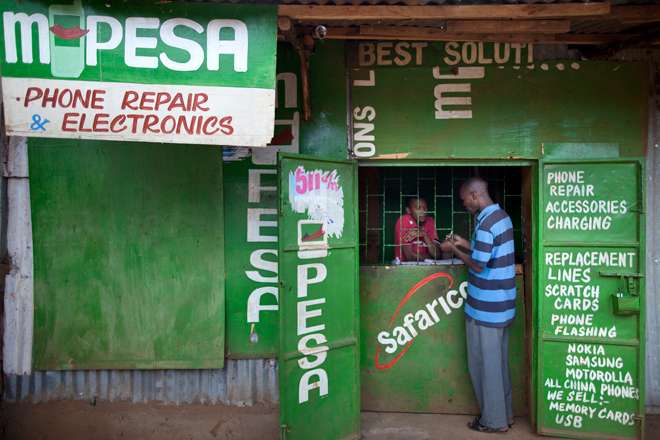 The advent of mobile payments has transformed Africa – connecting over half a billion consumers with global e-commerce – all through the most basic feature phones.

While approaching Africa as one homogenous market is a recipe for failure, the thriving ecommerce sector has developed around one truism: the market is the vast, but the transactions are small.

“It talks to the fact that disposable income and affordability are limited, as is access to credit, transport and technology,” Thakoor explains. “So whereas Europeans will buy their washing powder in 10kg boxes, in Africa its commonly sold in micro packages – 30g. The same logic is applied in ecommerce.”

Financial institutions and operators have come to understand that in targeting consumers in Africa, they have to have to create an infrastructure within this micro context.

“That’s why mobile money has become such a success. Europe has been card based for a long time; Africa is cash-based. By that we mean either physical cash or mobile money.”

Africa has largely remained an untapped source of revenues for the global digital economy, but the advent of “mobile money” has started to change that – connecting half a billion consumers with international commerce, all through the most basic of mobile phones.

“As we exponentially accelerate the development of hardware, software and AI, the sale of feature phones – your basic first generation Nokia that you might remember from the nineties – exceeded 54 percent in some parts of East and West Africa. Again because of limited affordability access and income.

“For operators looking at the region, these kinds of mobile payments are essential”, she adds.

Today there around 557 million unique mobile subscribers in Africa, or roughly half the continent. And as financial innovators are increasingly able to use these rudimentary devices to offer banking services – you can open an mobile account now for one Kenyan shilling (around 10 US cents) – it’s predicted that by 2020, 75 percent of the African population will have access to financial services products.

One of the most common forms of mobile payment methods in Africa is airtime. Consumers can purchase prepaid airtime from their telecom provider – Orange, Vodafone, AirTel and others, all offer this services across different locations – and exchange it via SMS or USSD protocols for goods and services. International operators can and increasingly do connect with consumers in this way through APIs.

“If you look at airtime sale in some countries, it makes up the equivalent amount of another smaller country’s GDP. That gives you an idea of how big prepaid airtime is in Africa. It’s almost like a currency.”

Another mobile payment method sweeping across Africa is M-Pesa. Founded by Vodafone Group, the largest telco providers in the East Africa, M-Pesa now has 287,000 agents across ten countries, where users can go to deposit physical funds into a virtual wallet, which can then be accessed on a feature phone to pay for almost anything.

“That has fundamentally changed most of the Eastern region, and has definitely moved into the West and some parts in the North – although less so in the deep south, such as South Africa”.

“M-Pesa is used to pay bills, it’s used to purchase airtime, you can receive Western Union transfers, and even paypal is integrated into M-Pesa. It’s really the form of payment for any individual to make a payment or for merchants to accept payments.”

There were six billion M-Pea transactions in 2016 alone – or 528 per second. By bridging the gap of financial inclusion through mobile payments, a whole raft of known international operators have been able to grow across Africa, driving growth and employment in many cases and disposable income.

Jumia – dubbed the “Amazon of Africa” – is a German-based merchant that has enjoyed double digit growth across the continent in recent years. Airbnb is now starting to take hold, with one million users in South Africa alone, and Uber already has 60,000 drivers across the continent.

Gaming operators are taking the market by storm too. Mobile sportsbook penetration is already at 35 of the 52 countries – a market valued at $18bn – and rising rapidly.

NO COUNTRY FOR OLD MEN

Of the three largest markets, in terms of population, GDP and GDP per capita – Egypt, Nigeria and South Africa – only two are predisposed to gambling, and both of them have negative growth.

“This is the reality – it’s Africa,” says Thakoor, in a gesture of assurance. “There is, however, considerable mobile penetration.”

Nigeria’s economy may have contracted by 1.5 percent in 2016, but there are some 20 operators in the markets today, mainly land-based casinos and online sports betting. “From a regulatory perspective there’s nothing explicitly stopping gambling. So it’s a grey area, but plenty of opportunity there.”

The Egyptian economy is the only one of the three to have expanded over the last 12 months, but predominantly muslim, most locals are forbidden to gamble – the foreigner only land-based market is vibrant however, feeding in the main off high-rollers from the also muslim Saudi Arabia.

“And then there’s South Africa, we’ve got five operators of land-based casinos as well as other gambling products, a little bit of sports betting, and the biggest National Lottery on the continent – at one point there was a $10m lottery pool.”

Crudely, the continent is split between a muslim north – where traditional forms of credit and interest are outlawed in lieu of “Islamic finance” – and a Christian south. Subsequently the vast majority of credit-based activity, and gaming, takes place in the sub-saharan regions.

“More recently West Africa has shown the most growth opportunities, in fundamental industries like information technology,” she adds. “When they start bubbling like this, that’s when you want to get in, because there’s a lot more disposable income flying around.”

West Africa comprises high growth markets – subscriber penetration of about 47, smartphone adoption at about 24 percent – making it the second highest region for adoption.

“In East Africa, Kenya and Tanzania are strong. And Rwanda is doing some exceptional stuff from a fintech perspective, and tech in general. They have a progressive government, a progressive culture, and their growth is amazing. They’re starting from a low base, but they are hungry and after the instability they experienced, they have an appetite to integrate back into the global economy.”

Central African states struggle the most, with low penetration and smartphone adoption, political instability and poor infrastructure. “So they’re probably not markets you want to look at early on, until there’s a little more social and political stability.”

Angola is the exception to the rule: “phenomenal growth, both through construction and other factors like Chinese influence and investment.”

South Africa is of course the most developed of all. “It’s a very mature market: they have a developed banking system, app developers, and the access to smartphones is the highest on the continent.”

“If you’re looking to Africa, start with South Africa. Get your feet wet then move into Nigeria and other markets”.