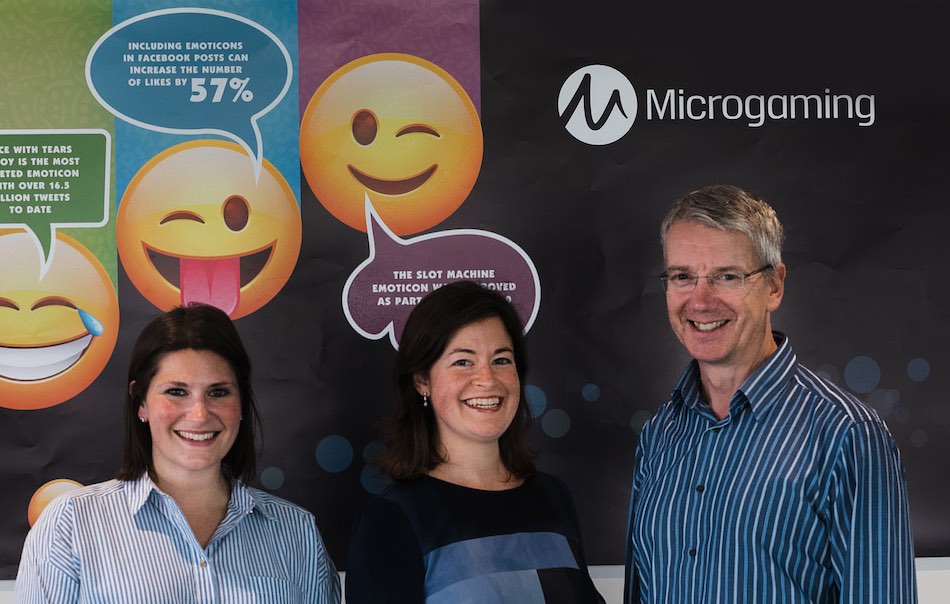 The launch of Microgaming’s latest online slot, EmotiCoins, has sparked all manner of emotions as the title was developed through a staff-powered innovation initiative.

Based on the popular emoticon phenomenon, EmotiCoins is a five reel, 30 payline online slot born from an idea pitched by two members of staff, Anna McChesney and Rob Mercer.

The pair hit upon the notion at the Microgaming Idea Factory, a staff-powered innovation initiative which won The Spark Award 2017.

Anna McChesney, PR Manager for Microgaming, said: “As a marketer, to me the use of emoticons in social media and communication is fascinating; they have essentially become a universal language! 92% of the world’s online population use emoticons, so developing a themed game would automatically target the demographic of our operators’ players.”

First submitted to the Idea Factory contest in June 2016, Anna and Rob highlighted the use of emoticons in today’s world. One such use is highlighted by the fact that including emoticons in Facebook posts can increase the number of likes by 57% and Face with Tears of Joy is the most tweeted emoticon with over 16.5 billion tweets to date*, according to Emogi Research (2016 Emoji Report), Quintly (2016 Instagram Emoji Study), SwiftKey (2015 Swiftkey Emoji Report), Twitter (2016).

Microgaming claims the themed slot idea gained the sponsorship of the Business Intelligence team from an early stage, helping the duo refine EmotiCoins by suggesting game features that were most likely to be successful, based on the typical emoticon user. Using these insights, Anna and Rob pitched a unique set of emoticons alongside the feature sets to complement the game’s theme at their final pitch to the Decision Panel (a selection of senior executives) in November.

EmotiCoins was subsequently announced at the staff Christmas party in December 2016 as one of five winning ideas out of the 27 put forward, and its journey from prototype to reality was kick started. Just one month later, one of Microgaming’s game development teams fully embraced the game and began to bring the online slot to life.

Rob Mercer, Enterprise Solutions Team, comments: “It was amazing to see what they did with the research and background we developed. We really love the completed game!”

The game will feature two brand new wild features in both the base game and free spins, Wild Blast™ and Wild Stickers™, alongside wins of up to 92,000 coins and a minimum bet of 0.30.

Emoticons is currently live with Microgaming and Quickfire operators on desktop and mobile.

The Microgaming Idea Factory was spearheaded by Lydia Barbara, Head of Innovation Strategy at Microgaming. “We are super excited to be taking live the first game concept driven from the Idea Factory by staff members who would ordinarily not be involved in game conception. And it’s a great game to be our first – the game studio did a fantastic job.”