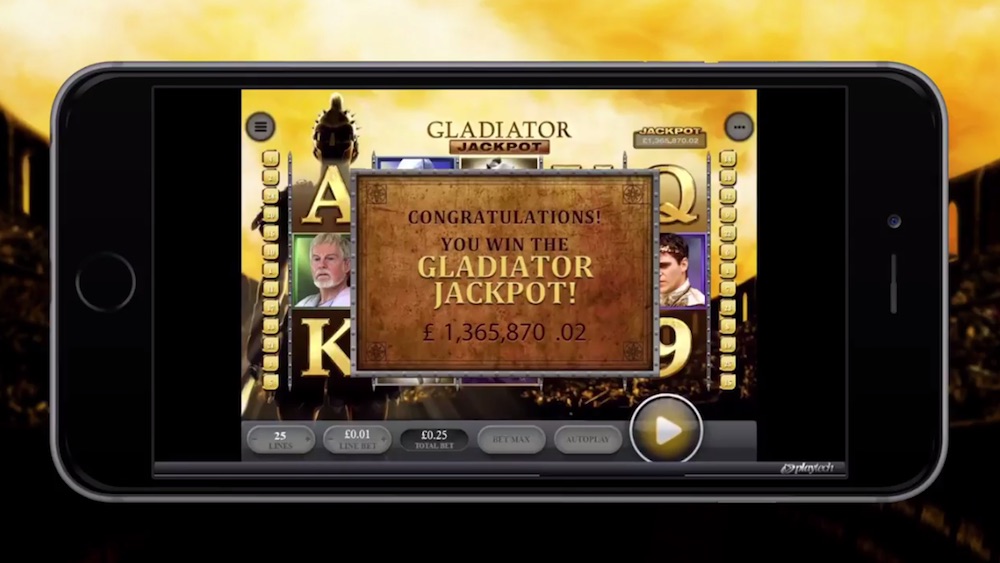 The winner aims to “give up work” after scoring one of the biggest mobile jackpots ever on the popular Playtech progressive slot, Gladiator.

A 47-year-old job centre employee and married mother of two children says she plans to “give up work” after a 25 pence spin landed her one of the biggest mobile jackpots ever won on Playtech’s Gladiator.

I just felt sick and didn’t know what to do with myself. It’s just completely amazing and will change everything for us

Playing on her mobile after depositing £30 and playing for 25p a spin, ‘Angela’ triggered the Gladiator bonus round and hit one of the biggest mobile jackpots of the year worth £1,365,870.02 on bgo.com.

Angela won the prize at just before 8am on Wednesday 31st May, an unusual time for her to play her favourite slot game as she would normally be getting her children ready for school. Last week, however was the half term holidays for the majority of UK school children, and during a brief moment of downtime, decided to log onto her account while her children and husband were still asleep.

As soon as she hit the multi-million-pound prize Angela ran upstairs screaming, waking up her husband who had been on a night shift. “I saw the amount and felt like I was in a dream,” she said. “I just felt sick and didn’t know what to do with myself. It’s just completely amazing and will change everything for us.”

James Frendo, Casino Director, Playtech, said: “We pride ourselves on offering the best-performing games including a huge variety of progressive jackpot titles and the industry’s biggest and best progressive jackpots, and this win is no exception.

“Gladiator is one of our most popular premium branded titles, consistently offering players exceptional entertainment and huge prizes, and performing brilliantly over the years.”