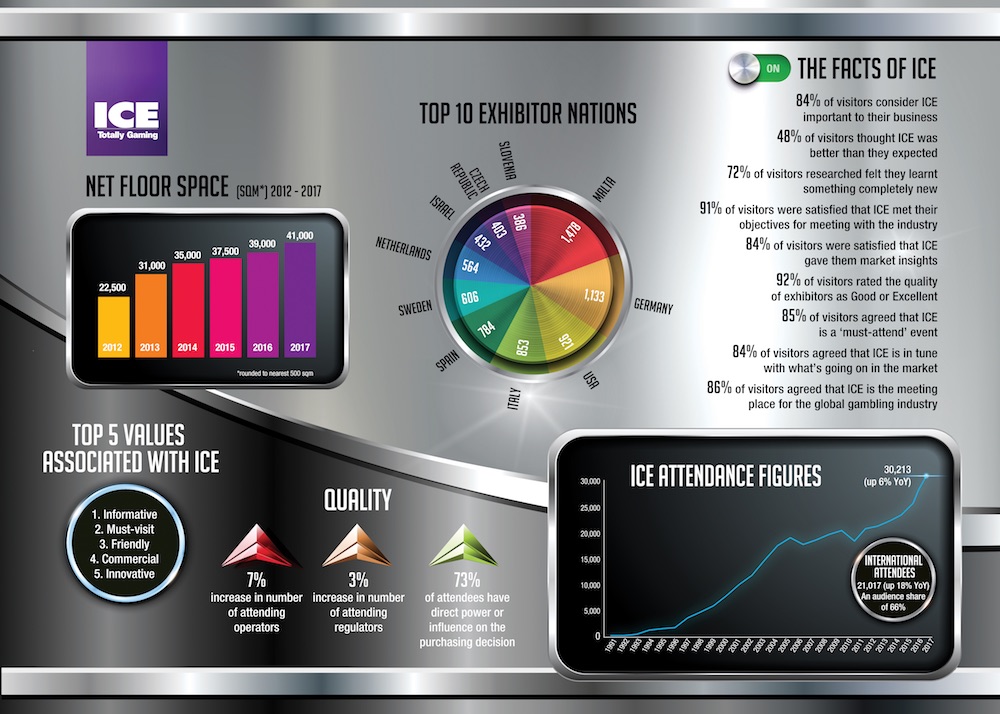 ICE 2017 has been confirmed as the most successful edition on record with attendance independently audited at 30,213, up 6% year-on-year and the sixth consecutive year of growth experienced by gaming’s leading business-to-business event.

Arguably the most notable statistic relates to a double digit increase in the number of non-UK based attendees to ICE which totalled 20,032, up 18% on 2016 and a figure which represents a formidable 66% of the audience share.  Excluding host nation the United Kingdom, the top five represented jurisdictions were Malta (1,478 attendees), Germany (1,133), USA (921), Italy (853) and Spain (784).  The increase in attendance is more than matched by an increase in the physical size of ICE, which has grown from 21,000 sqm of net space in 2012 – which was the last tenancy at its previous home in the now demolished Earls Court – to the 2017 total of 41,000 sqm (both figures rounded to the nearest 500 sqm).

Reviewing the figures, Kate Chambers, Managing Director, Clarion Gaming, said: “Firstly these are excellent figures which are a reflection on the hard work and commitment shown by of all our stakeholders, not least the community of  ICE exhibitors who bring energy, enthusiasm and creativity to their presence In London.  I am also extremely grateful to our body of critical friends including those working in the international gaming media, who ensure that we remain relevant to the industry and in tune with the latest developments and trends in the market place.  To achieve consistent year-on-year increases in attendance does not happen by accident and I am indebted to the team at Clarion Gaming for their professionalism and commitment to continuous improvement, a philosophy and approach which underpins all of our gaming brands.  Over six editions of ICE, the event has grown in size by 42%, vindicating the decision to relocate to the purpose built ExCeL Centre, the only London venue which has the capacity to stage gaming’s most important business event.”

The attitudinal survey undertaken each year by Clarion Gaming reveals some interesting insights to the ICE experience.  Top of a list of positives was the response to the quality of exhibitors with 92% of visitors rating them either Good or Excellent.  91% of visitors said they were happy that ICE met their objectives for meeting with the international gaming industry.  The quality of the exhibitors at ICE was matched by the seniority of the visitors, 73% of whom had direct control or influenced the purchasing decision.  The overall feeling of satisfaction was reflected in the list of values visitors associated with ICE, which included Informative, Friendly and Innovative.