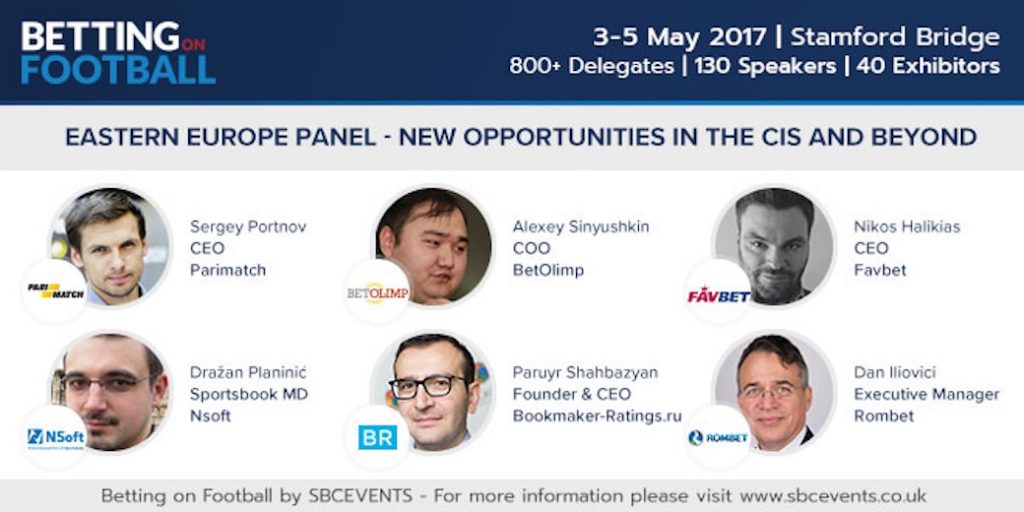 Conference explores new opportunities in the CIS and beyond.

Three of the leading Eastern European-focused gambling operators will be represented in a Betting on Football 2017 session exploring new opportunities in the CIS and beyond.

Parimatch chief executive Sergey Portnov, BetOlimp chief operating officer Alexey Sinyushkin and Favbet chief executive Nikos Halikias will be joined on the market profile panel (3 May) by a trio of experts from the region.

Dražan Planinić, the sportsbook managing director for virtual games, sportsbook and lotteries provider NSoft, and Paruyr Shahbazyan, chief executive for the globally-renowned Bookmaker Ratings, will also be sharing their insight on the crossover between the different jurisdictions in Eastern Europe and how local sports organisations are approaching partnerships with the bookmakers.

Shahbazyan commented: “At Bookmaker Ratings, we are proud to have delivered honest reviews to punters since 2011. In Russia, the landscape is a bit more complicated, given that Roskomnadzor is determined to limit the number of licensed bookmakers, and has recently stepped up its efforts to block Western European operators from targeting its national consumers. We are looking forward to sharing our insight on the current situation at Betting on Football 2017.”

Portnov said: “It is clear that many markets out east are now moving towards the standards set by western Europe with regard to clearer regulation – even if tax rates remain contentious – and that will also inevitably lead to greater revenues in the years to come.”

Halikias added: “It is particularly interesting for us to discuss the current situation in Russia, given that Favbet was one of the many Eastern European focused operators restricted access to the market by Roskomnadzor. We are looking forward to sharing knowledge about regulation changes in Russia and some of the other Eastern European countries on a high level panel at Stamford Bridge.”

This highly-anticipated #bofcon2017 session will be moderated by Dan Iliovici. Formerly an executive manager for Rombet, the association which protects the interests of the growing number of operators that engage in land-based and online gambling activities in Romania, Iliovici was recently confirmed as president of the country’s national gambling office and regulatory body, the ONJN. He will be overseeing a new legislative framework, introduced in 2015, which opened the national market and made it more attractive to international operators.

Alongside Romania, the session will also deliver updates on two of the most populated countries in Eastern Europe, Russia and Poland. Russian media regulator Roskomnadzor awarded a handful of online gambling licences in the summer of 2016, but continues to monitor the likes of Winline, 888.ru and Leon.ru with strict payment-processing regulations and taxes on wagers.

Over the last few years, under instruction from the Russian government, Roskomnadzor has blocked IP and payment-transaction services to numerous European operators including Unibet and BwinParty, which were deemed to be illegally targeting its national consumers. Just last month, BetVictor confirmed the suspension of its Russian betting services.

Meanwhile, EnergyBet described the situation in Poland as “highly restrictive and hostile” upon withdrawing from the market. Just a few days later, William Hill followed suit, citing the refusal to amend a 12% online gambling turnover tax which is “unworkable for international operators”.