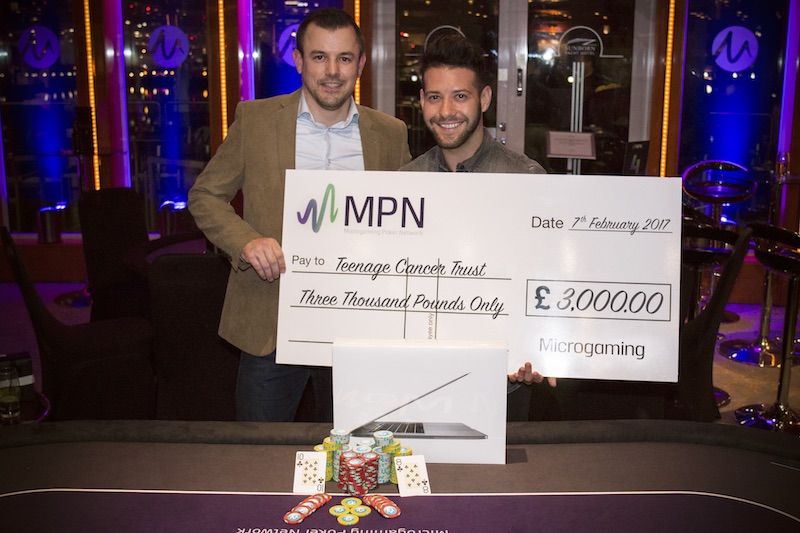 The MPN team took part in a charity poker tournament with Microgaming operators during this year’s ICE Totally Gaming 2017 raising a total of £7,000.

The tournament was held on the Sunborn London, a luxurious super yacht hotel moored adjacent to the ExCeL Centre, and exclusive to Microgaming throughout the exhibition.

Over 80 guests and staff competed for the win and after more than three hours, the eventual winner of the Main Event was Alon from Crazy Vegas.

Alon chose Teenage Cancer Trust, which supports young people diagnosed with cancer, as the recipient of the winning prize in the form of a £3,000 donation.

Sabina Ruta, Regional Fundraiser for Teenage Cancer Trust, said: “Thank you so much to Microgaming and the MPN team for continuing to support Teenage Cancer Trust; we are delighted to receive £3,000 from one of their most recent events. Every penny donated will help us to support teenagers and young adults facing a diagnosis of cancer.”

Second place was won by Sean Auret from Lucky247 who picked Save the Rhino as the recipient of a £2,000 donation.

In third place, Jean-Christophe Antoine from Betsson, also chose Save the Rhino, receiving a further £1,000 donation from Microgaming.

One of the recipients of Microgaming’s annual Gift of Giving initiative for two years running, Save the Rhino are recognised for the work they do to support endangered rhinos in Africa and Asia.

“We are absolutely thrilled to receive a fantastic £3,000 following Microgaming’s MPN Charity Poker Tournament, to help us protect endangered rhinos across Africa and Asia,” explained Josephine Gibson, Partnership Development Manager at Save the Rhino. “This donation comes at a critical time to help us safeguard the future for rhinos in the wild. Extensive poaching for the rhino horn continues to threaten survival of this iconic species, with at least 1,054 rhino being poached in 2016 in South Africa alone. Despite the encouraging decline of 10.3% compared to 2015, the rise in regions outside South Africa continues to be cause for great concern. We really value Microgaming’s long-term support, having donated £18,000 in total to date.”

There were a number of side events in aid of charity too, including a £500 bounty from Microgaming CEO Roger Raatgever, which was won by Rob Deaves from 32Red, who chose The Children’s Centre to receive the cash amount.

The Children’s Centre CEO, Fiona Dawson, said: “We are delighted to receive this generous donation and support from Microgaming. The funds will make an immediate difference to the lives of local children, young people and families who benefit from the charitable services offered by The Children’s Centre on the Isle of Man. The £500 donation will go towards The Community Farm projects that engage with children and young people to develop vital life skills such as resilience, forming relationships, empathy and preparation for dealing with the unexpected.”

In addition, the Sit n Go tournament was won by Rory Cartwright from Betsson and the £500 winning donation was donated to the MS Society Isle of Man, a branch of MS Society.

Derek Patience, Chairman of the MS Society Isle of Man branch, said: “We are very grateful to be selected as the charity of choice by the winner of the MPN’s Sit n Go Side Event, and of course to receive a £500 donation. This money will be put to great use, providing support, guidance and care to those suffering with Multiple Sclerosis on the island.”

Commenting on the inaugural MPN charity poker tournament, Jean-Luc Ferriere, Director of Network Games at Microgaming, said: “The Network Games team were honoured to host such an entertaining and rewarding event. I would like to thank everyone, not least the players, involved in making the MPN Charity Poker Tournament such a success, and look forward to including it in our calendar for ICE 2018. Microgaming and the MPN team believe that Playing It Forward is very important and we hope the four winning charities benefit greatly from the prize money donated.”