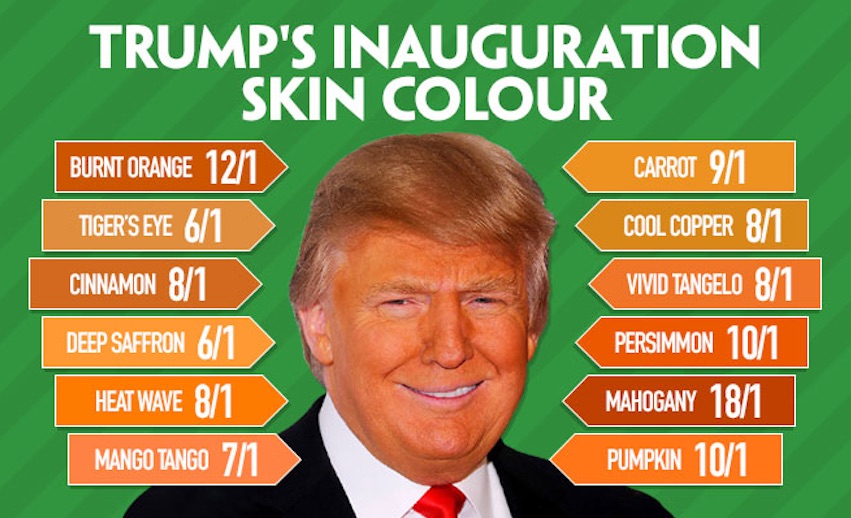 Paddy Power pushes its political betting odds during 2017 with a focus on Donald Trump to make up for lack of major sporting events this year.

A year of no major sporting tournaments is normally bad news or bookmakers, but for one creative odds-bod 2017 offers another way to keep people betting.

Despite political betting – and Donald Trump in particular – not working out well for Paddy Power Betfair, the Irish bookie is turning to a host of Trump-related events to make up for the dearth in sports cups this year.

“There was me worrying about 2017 having no major sporting event – I just need to tune into the Trump Show, which is on daily, on Fake News shows everywhere,” says pseudonymous Paddy Power Spokesman, Patrick ‘Paddy’ Power.

“We’ve been Russian out various markets on the President ever since his election – at this rate, we might have to build a whole new website just for him. We’ve a shower of golden bets on Trump, to take the edge off the reality of his reign.”

The bookmaker is currently offering 5 to 1 odds on the controversial president being officially accused of “foreign collusion” after Trump’s national security advisor resigned earlier in February because of intercepted phone calls with Russian officials.

Paddy Power has also created a “sack market” where punters can gain from their predictions on which member of Trump’s team is likely to get the chop next. The anti-igaming attorney Jeff Sessions is currently running at 9 to 2; CEO of oil giant ExxonMobil, and now secretary of state has odds shortened to 6 to 1; while the impressively dim education secretary Betsy DeVos also gets 6 to 1.

Paddy Power also invites punters to place bets on a range of “Russian Trump Specials” including: Trump to have a Russian airport named after him (12/1); The President to holiday in Russia every year of his term (33/1) and; the businessman- turned-leader to sell Alaska back to the Russians (100/1).