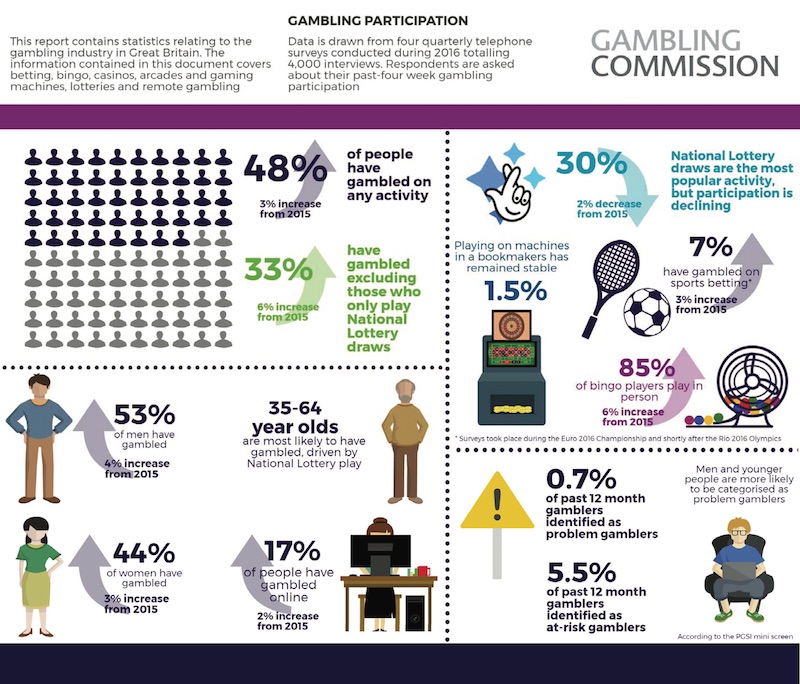 The UK’s Gambling Commission has released a new report offering fresh insight into the gambling behaviours, participation and attitudes of adults in Britain.

A new report investigating gaming participation, behaviours and attitudes in the UK has discovered that 48 percent of all adults engage in some form of gambling each month, with more than two thirds of those surveyed saying they should have the right to gamble whenever they want.

Among its key findings was the fact that, of those surveyed, 48 percent had participated in some form of gambling the last four weeks – an increase of three percent against last year’s findings. More than half of men – 53 percent – said they had gambled in the past month, compared to 44 percent of women surveyed, with participation increasing across both demographics.

Unsurprisingly, the use of mobile phones and tablets to place bets continues to grow at a rapid pace. Since 2015, the number of individuals who said they had used a mobile device to gamble had increased to 43 percent – a ten percent rise against last year’s figures. Of the 17 percent of adults who gambled exclusively online, an overwhelming majority did so from the comfort of their home.

Meanwhile, as the government starts to take a closer look at licensing of gaming machines, more than two thirds of people surveyed came out strongly in favour of retaining the current level of access to gaming products. While almost seventy percent said they thought phentermine online buy gambling could potentially have a negative impact on home life, a huge proportion of Britons – 67 percent – believed they should have the right to gamble whenever they want.

“This report paints an important picture of how consumers in Britain choose to gamble – identifying emerging trends and potential risks to the public,” commented programme director James Green. “We are also now able to provide a more detailed snapshot of online behaviours, which featured for the first time last year.”

One issue thrown up by the report is the continuing low levels of consumer trust in gambling firms. A meagre third of individuals felt that gambling was fair and could be trusted, with “unfair” terms and conditions such as limits on the availability of and/or means of qualifying for a free bet being the primary concern. Complaints about Terms and Conditions may well be affected by how few people actually read them, however. Of those surveyed, just 23 percent said they paid attention to gambling companies’ Ts&Cs.

Problem gambling remained stable at 0.7 percent, while ‘at-risk’ gamblers made up 5.5 percent the survey group. However, gambling on gaming machines – which have been singled out as a point of concern in the current DCMS stakes and prizes review – has remained entirely static over the past year at 1.5 percent.

“Effective protections come from strong evidence,” added Green. “Our research puts us in a powerful position to better understand the needs of gambling consumers.”