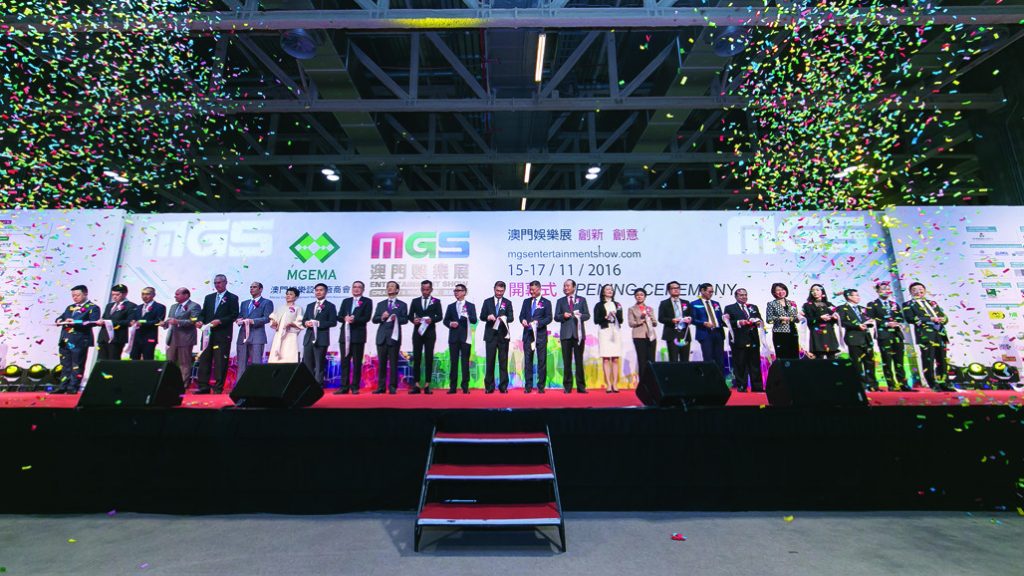 The MGS Entertainment Show has a tough task on its plate. It’s up against the long established G2E Asia expo, and has been driving its impressive momentum in spite of the worst phase of economic figures to come out of Macau for the best part of two and a half years. Edition number 4 – and the show goes on with the full backing of the Government and the trade body. MGS is determined to remind people that it is here to stay.

[dropcap]M[/dropcap]GS took to the floor at the Venetian in November in probably the most significant week on the Macau SAR calendar. With MGS courting the world’s gaming industry during the week, the Macau Grand Prix took over at the weekend – a huge event for the city – and then there was the SAR chief executive – the main man in Macau – making his annual statement of affairs to the people, a report – the most important report for the city – that sets the scene for the 12 months ahead.

Whilst there was little gambling on his agenda, there was much talk of the subject during the three days of MGS. The fourth edition of the show, which was branching out into ‘casino resort’ territory and showing a definite skill for the broader needs of the casino house, gave a solid return this year. But it must be better declared Jay Chun, the charismatic chairman of the trade body behind the show, the MGEMA.

Mr Chun wants footfall, he wants innovation, he wants ground breaking products. All of which, incidentally, found their way on to the MGS floor – the likes of LT Game, IGT, Novomatic, Konami, Betconstruct – there was no doubting the quality of product on display.

And there was no question over the status of the event given its huge backing from the Macau SAR Government – no fewer than 5 departments support the show – and this year came the crucial backing from the People’s Republic Government Liaison Office in Macau.

The show has important friends in important places – and that’s not including the key casino concessionaires and major sports and gaming bodies that partner the MGEMA in running the event.

The symbolic opening ceremony remains the highlight of MGS – visitors were welcomed by a show of strength from the Governments of the Central People’s Republic and Macau SAR, and the major players in the Macau industry.

On the floor, it was probably LT Game that stole the show with some less than traditional products. The Paradise Entertainment subsidiary had a robot-cat card dealer as the centrepiece of its vast stand, which also held a virtual reality cycling area, a virtual horse racing game, and two new slot machines.

Novomatic were also a show highlight in terms of the top quality on display. The Austrian giant is keen to make its mark in the Asian market and its portfolio was certainly staking its claim.

There is, though, one problem: Macau remains a tale of two exhibitions, an issue that was a talking point during the event. Some manufacturers relished the chance for bi-yearly visibility in the Macau and Asian market, while others argued that only one event is necessary for such a compact city. That said, MGS has certainly made its efforts to diversify – and indeed, in ironic fashion, the show supports G2E through the membership of its owner the MGEMA.

Politics aside, MGS brought in all the big players from the region – Aristocrat and IGT, the former of which holds the largest market share for gaming machines in Macau.

Such companies will be glad to see a return in growth to gaming revenue over the last quarter as Macau attempts to adapt to attract the mass market. This challenge, however, was shared by the manufacturers, with many products shown at MGS designed to appeal to this new market rather than the high-rollers upon which Macau was built.

Macau is indeed a market in transition – something which the MGS showfloor was aiming to reflect.

But outside of Macau, one talking point was Japan’s imminent vote to legalise the casino industry. This was in part stirred up by an excellent MGS Summit talk by Professor Toru Mihara, who gave a detailed review of the country’s road to legalisation.

In fact it was not just Japan that manufacturers were excited about, but also the whole of Asia, with many exhibitors finding success in the plethora of regulated markets across the continent.

While Macau is seen by some as a tough nut to crack, MGS has drawn the Asian market into the event with visitors attending from countries such as South Korea, Cambodia, the Philippines, Vietnam, Malaysia and Singapore.

In only its fourth edition the show is still maturing and developing a personality, however a record number of exhibitors (170+) and visitors (14,487) this year should provide optimism for MGS’s 5th anniversary in 2017, and for many years to come.

This article was originally uploaded on www.casino-review.co