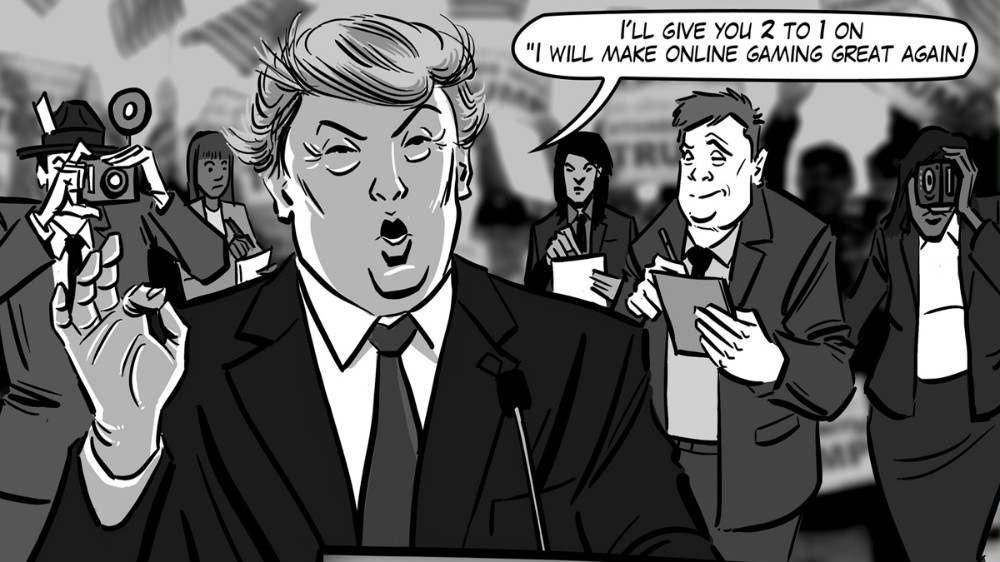 With a former casino owner in the White House it’s tempting to start celebrating the imminent liberalisation of US gaming laws. Our guest writer Warwick Bartlett, CEO of Global Betting and Gaming Consultants, warns that this  is far from a foregone conclusion.

[dropcap]I[/dropcap]t is hard to believe that a candidate for president of the United States has previously owned casinos in New Jersey. I cannot imagine anyone else in prudent America being able to win an election with that track record.

A year ago I gave a speech at MiGS Malta, and said the best hope for online gaming in the USA was if the US electorate chose Trump as president. The general feeling from delegates was that may be so, but what about all the other baggage that may come with Trump?

What I do know is that whoever you do elect, you will be disappointed, whatever is promised is rarely delivered, so might just as well go for what suits you. I doubt many of Trumps bizarre policies will ever come to fruition, so settle for what suits our industry and make hay while the opportunity presents itself.

I recall when Barack Obama was elected that people pointed to him playing poker once a week. Surely this was going to help legalise poker in the US. Then along came the global financial crisis in 2008 and the president had more pressing things to deal with, gambling not being one of them.

Steve Wynn after leaving MGM to set up Wynn Resorts asked his friend Donald Trump if he should trade under his own name. Trump said if you fail, or let your service to the customer decline, then the media will kill you. It was good advice and Steve Wynn’s resorts have been built on superlative customer service. I mention this because it shows the close relationship between the two of them.

Steve Wynn along with Sheldon Adelson is on the committee organising Trump’s inauguration ceremony. Adelson donated US$45m to the Republican Party but only $5m to Trump. Steve Wynn did not support his friend Trump, preferring to keep his counsel for fear of upsetting China and thus endangering his investment in Macau. Trump during the election said on numerous occasions that he intended to change the pattern of trade with China.

The question now arises that given Trump’s previous history with casino ownership, his friendship with Steve Wynn and campaign funds from Sheldon Adelson how will this all translate into a benefit for the igaming industry.

There has been a change in attitude from the American Gaming Association (AGA), they are now seriously changing stance on their policy toward sports betting.

“The casino gaming industry is aligned that the status quo is unsustainable,” said Geoff Freeman, president and CEO of the AGA. “We look forward to working with law enforcement, sports leagues and other interested parties to consider effective approaches to protecting consumers and the integrity of sports.”

However Sheldon Adelson also an AGA member is opposed. Steve Wynn was in favour, and had a deal going with PokerStars until indictments were issued against the company, now he is opposed.

On 21 September, Tom Cotton, Republican senator for Arkansas and an ally of Sheldon Adelson, filed a bill in the senate that is almost identical to the Restoration of America’s Wire Act that would federally ban internet-based gambling in all states.

On the one side you have Caesars and MGM in favour with Wynn and Adelson opposed to internet gambling. Jim Murren, MGM’s chief executive prior to the US election said he supported Hillary Clinton, even though he was a lifelong supporter of the Republican Party. Trump however is on record a few years back saying that he thought internet gambling should be legalised.

We have seen that Trump is loyal to his friends; hence the warm greeting received by Nigel Farage, the architect of Brexit.

Recession is normally the catalyst to changes in gambling regulation with importance attached to taxation and consumer protection. A better regulated sports betting market in the US would end illegal gambling where the proceeds can be used to finance other illegal activities. In my view this is the key driver. The tax raised for an economy the size of the USA would not be material, something in the region of $6bn to $7bn. The US navy has just spent $13bn on a new aircraft carrier, which puts things in perspective.

So what does Trump mean for gambling? My guess is that if any deregulation does come it will be because Las Vegas operators need state by state sports betting to augment a flat line, oversupplied Vegas market. He just might be persuaded by his friends, except they are not in favour! So the odds slightly favour everything staying as it is, with perhaps some changes to a more liberal attitude to land-based casinos. But this is the USA, you just never know!