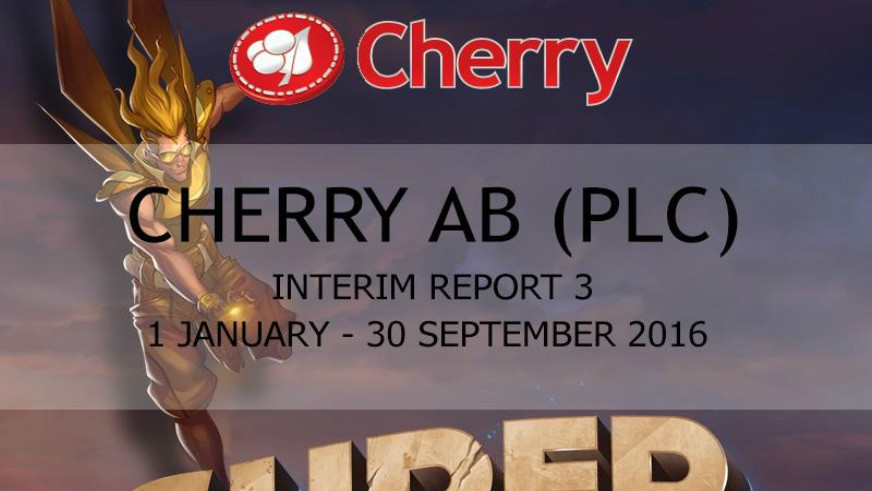 The latest Cherry Interim Report for Q3 highlights revenue increases across group with significant profits for Game Lounge and Yggdrasil.

[dropcap]T[/dropcap]he Cherry Interim Report recorded Q3 revenue growth of 39 percent year-on-year to MSEK 214.0 across the Cherry Group which follows revenue increase of 64 percent to MSK583.0 for the first nine months of 2016.

Cherry’s latest report, which covers 1 January to 30 September 2016, also highlighted improved profitability during Q3 thanks to new acquisitions and substantial growth across its major investments.

The Scandinavian company reported EBITDA increase of 78 percent year-on-year to MSEK 30.9 whilst the EBIT came in at MSEK 21.5 as a result of acquisition costs for ComeOn Malta and Nasdaq.

Cherry’s recent acquisition of ComeOn Malta shares in July is covered in the latest report with ComeOn reporting an increase of around 36 percent to MSEK 263.

Commenting on the latest Interim Report, Fredrik Burvall, CEO of Cherry, said: “Cherry continues to grow substantially faster than the market. For the third quarter, organic growth amounted to 38 percent and total growth to 39 percent. The formula for success is based on the strategy Cherry implemented two years ago, in which we have developed our business areas and added strategic acquisitions of fast-growing companies where the founders and entrepreneurs continue to stay active in the business.

“During the quarter, Cherry finalised the acquisition of 49 percent of ComeOn and, until December 31, 2016, holds an option to acquire the remaining 51 percent of the company. The acquisition means that Cherry strengthens its position in online gaming and enhances our position against competitors, both in Scandinavia and in other European markets, while adding strong brands.

“Our ambition is to continue to grow faster than the market, and we are well prepared to do this, both through organic growth and via acquisitions.”