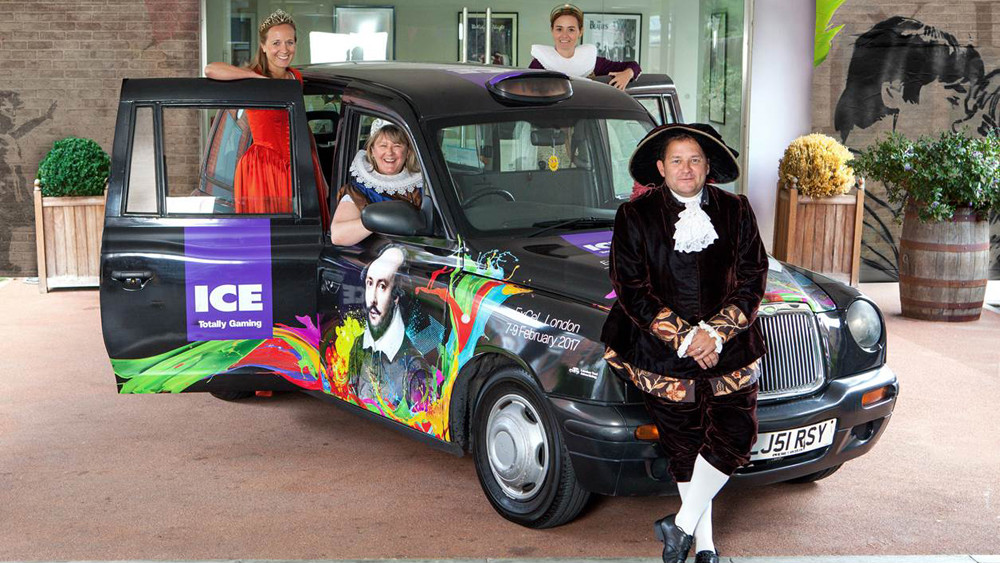 The creative marketing team responsible for ICE Totally Gaming has drawn on the unconventional cultural sources of William Shakespeare and graffiti artist Banksy as inspiration for the campaign in support of the 2017 show (London: 7-9 February).

[dropcap]T[/dropcap]he ICE 2017 ‘World theatre of gaming’ campaign, which features a Banksy style treatment depicting the world’s most famous dramatist, was unveiled at a special photo shoot featuring an ICE liveried London taxi and attended by senior members of the team responsible for delivering what is gaming’s biggest and most influential business event.

Explaining the thinking behind the latest ICE campaign, Kate Chambers, Managing Director of Clarion’s Gaming Division, said: “Each year we place great importance on developing a visually strong creative in order to engage with a global audience which, in 2016, comprised an independently audited, record 28,487 visitors drawn from 150 nations.

“The concept of ICE being an international theatre of gaming was one of the insights that came out of this year’s post show visitor research and using William Shakespeare, whose work has been translated into 100 languages and who has inspired movies/television shows throughout the world, from India to Italy and Thailand to Tibet, was a perfect fit.

“As well as the strong international credentials, there are also much closer links, with Shakespeare staging many of his plays at the Globe Theatre, which is just 6 miles (less than 10km) from the ICE home at ExCeL. Being true to our brand values, we wanted to deliver Shakespeare with a ‘twist’, hence the contemporary, graffiti style treatment.”

She added: “Gaming, whether it is online or land-based is about theatre, about entertainment and in the process, delivering a compelling customer experience. The message I would like to extend the industry, is that with over 500 leading commercial players occupying a stage of 39,000 square metres (420,000 square feet) the world theatre of gaming is coming to London in February.”

For more information on the world theatre of gaming, visit icetotallygaming.com

This article originally appeared on www.casino-review.co