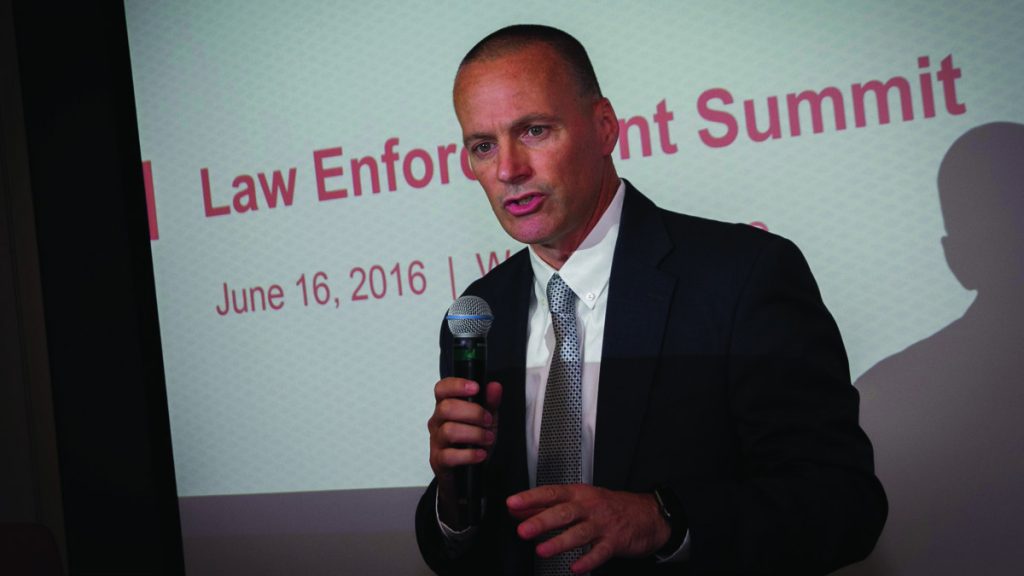 As part of its continued efforts to crack down on the US’ $150bn-a-year illegal sports betting industry, members of the American Gaming Association’s Illegal Gambling Advisory Board convened with top law enforcement officials to discuss their response to the issue.

[dropcap]T[/dropcap]he American Gaming Association (AGA) stepped up its assault on illegal gambling in June when senior law enforcement officials convened to discuss strategies for tackling offshore sportsbetting in the country.

Representatives from across the spectrum of federal, state and local law attended the inaugural Law Enforcement Summit, which was spearheaded by members of the AGA’s Illegal Gambling Advisory Board. Organisations represented at the summit included the FBI, National Sheriffs’ Association and National District Attorney’s Association.

During the discussion, law enforcement personnel spoke of the illegal sports betting market – which is said to be worth around $150bn a year – as a significant problem and of regulation as a potential solution.

“No group is more credible in carrying that message and identifying a solution [to this problem] than members of law enforcement,” AGA president and CEO Geoff Freeman said in a statement. “Based on input from participants, the AGA’s Illegal Gambling Advisory Board will author an after-action report that will serve as a guide for stakeholders – including policymakers, regulators and sports leagues – to develop potential solutions.”

Speakers at the Summit also explored the alternative regulatory models in jurisdictions such as the UK and Nevada, in which sportsbetting has been fully legalised. Educating the group on the UK sports betting model, Genius Sports Group showcased its ability to use cutting-edge technology to monitor the integrity of games, while Karl Bennison, chief of the Enforcement Division at the Nevada Gaming Control Board, and other gaming industry leaders discussed the Nevada model.

With first-hand experience of the violent crimes tied to illegal gambling, law enforcement personnel agreed that the problem is anything but a victimless crime.”

“As one participant said of sports betting’s widespread popularity, “it’s not something you can put back in the bottle.” Americans bet at least $150bn a year on sports illegally and this number will only grow,” explained Freeman.

“In Australia, the UK and across Europe, stakeholders, including leagues, sports book operators and law enforcement, partner to give fans what they want – a legal, regulated environment to bet on the games they love to watch. It works in Nevada and it can work in states across the country.”

Attendees also sought to highlight the dangers of allowing such a prolific illegal betting industry to thrive, including the potential funding of criminal activities, money laundering and a lack of consumer protections against fraud and extortion.

But the AGA CEO also pointed out that law officials at all levels under resourced when faced with illegal gambling rackets, making it increasingly difficult to enforce current sportsbetting laws.

“We need to start talking about the ramifications of illegal gambling more and help the public understand what it means,” suggested one attendee. But despite the seriousness, these leaders also mentioned a lack of resources and interest in pursuing illegal sports betting activities,” Freeman added.