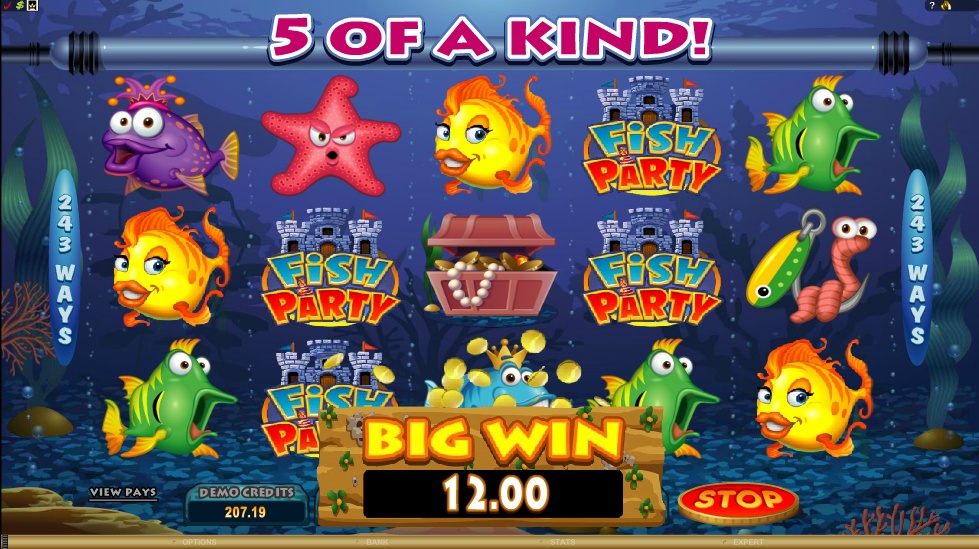 Isle of Man-based online casino pioneers Microgaming have launched their new Fish Party SNGs based on their successful online slot and offering a progressive jackpot.

[dropcap]M[/dropcap]icrogaming have announced the launch of Fish Party SNGs, a new and unique take on the popular Jackpot Sit & Go (SNG) concept, on its MPN network.

Combining the game of poker with Microgaming’s unrivalled experience in online slots and progressive jackpots, Fish Party SNGs give No Limit Hold’em players an ocean of opportunities to land the big one.

Fish Party SNGs are fast-paced, three-player tournaments based on Microgaming’s popular Fish Party online slot. At the beginning of each game, the slot reels spin and the tournament prize pool is decided by the outcome of that spin, with winning reel combinations delivering big prizes.
Unlike other varieties of Jackpot SNGs, Fish Party SNGs have a progressive jackpot which increases with every game played, so theoretically there is no limit to how much can be won.

“I truly believe we have created the best version of the Jackpot Sit & Go concept,” said Alex Scott, Microgaming’s head of poker. “The progressive jackpot enables us to offer bigger prizes than any other provider at a smaller cost to the player, and the link with a popular established slot gives poker rooms amazing opportunities for cross-sell.”

The rarest reel combination – three Fish Party symbols – pays out the progressive jackpot. The jackpot is seeded by Microgaming at 5,000x the buy-in, and on launch there are five buy-in levels to choose from – from £1 to £50

“With a typical game lasting just a couple of levels, it’s quite literally 5 minutes, no limits,” added Scott.

“Above all, I believe we have created the most thrilling version of the game the industry has seen – and this is all down to Microgaming’s expertise in creating the most exciting slot games in the industry. Today is a big day for the MPN; we are incredibly excited that Fish Party SNGs are now live.”
Fish Party SNGs’ RTP of 95 percent is equivalent to rake of just 5 percent among the lowest in the business.

Fish Party SNGs have initially launched on 11 July 2016 on the Windows platform, with support for mobile devices and Mac coming soon.
The launch of Fish Party SNGs follows on from Adjarabet’s successful launch of its own version of the product, Spin Poker,  on 21 June. Powered by Microgaming’s Babelfish API, which is the subject of patent protection, the new product has become an instant hit for the site.
PKR, which similarly uses the Babelfish API to connect its unique 3D software to the MPN, launched Jackpot SNGs on the 4th July 2016. In the short time since launch, PKR players have already hit the progressive jackpot once with three players splitting the prize of £27,133.52 from an initial £5 investment.
MPN poker rooms are promoting Fish Party SNGs heavily, with incentives for players to stream their tournaments on Twitch, among many other promotions.
Fish Party SNGs are the latest in a long line of innovations from the MPN team, including Blazing Cannon and Babelfish. Microgaming is investing over £10m in the poker product vertical in 2016 to further develop the network, which is contributing significantly to year-on-year, month-on-month growth